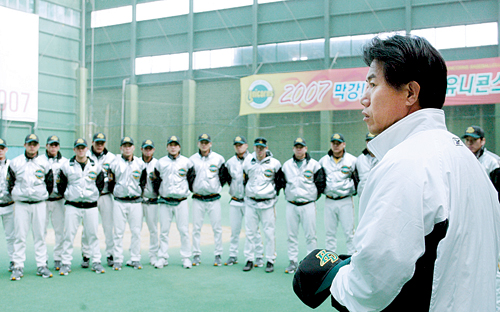 Hyundai Unicorns’ manager Kim Si-jin, right, addressing his squad in January at the team’s practice facility in Gyeonggi province. The cash-strapped team is in need of new ownership, and the Korea Baseball Organization is talking with three interested parties. Provided by the team

Korean baseball’s Hyundai Unicorns, the cash-strapped team whose existence is in jeopardy, cleared one barrier last week, but its future remains murky.
Last week, the team announced that it had paid its players’ salaries for February. The payday is the 25th of every month, but since it was on Sunday, the payment was made on the closest business day before it, Feb. 23.
However, the team still has not found new ownership, and its current owners, the affiliates of the business conglomerate Hyundai, have cut off support to the club. That means the Unicorns, who had to scramble for the 900 million won ($960,000) payout last week, might not get past its payday in March.
Under KBO regulations, if a team fails to pay its players their salaries on the year’s first payday in February, all of the players’ contracts are voided 15 days later, making them all free agents. After that, if a team cannot pay its players within 15 days of the monthly payday, the team enters league protection for 30 days. If a team doesn’t either find new ownership or secure support from its owners within that 30-day period, it must fold.
The Unicorns last week wrapped up spring training in Florida, and flew to Japan for some early March exhibition games. The season begins on April 6.
So where do the Unicorns stand now?
Since 2001, the Unicorns have had to rely on aid from a number of Hyundai affiliates. Unlike other clubs, who receive funding from their owners at the beginning of the season, the Unicorns have had to ask Hyundai affiliates for support every quarter.
Hyundai Fire and Marine Insurance, whose chief executive Chung Mong-yoon is a baseball fan, used to supply 4 billion won a season, but stopped the money this year. Hyundai Motor Group, chaired by Chung Mong-koo, halted its 8 billion won per year support starting this year.
New potential owners came and went last month. Nonghyup, a farmers’ cooperative federation, expressed the intention to take over the team, but pulled out days later after farmers protested. Then on Jan. 29, a Los Angeles-based real estate investment firm Pro-State Holding Co., contacted the Korea Baseball Organization with an inquiry about the Unicorns, but the company’s board rejected the idea of purchasing the team days later.
Stung by criticism of its public relations handling of those fiascos, the KBO is currently keeping mum on its negotiations with interested buyers of the team. The league has acknowledged that three companies have shown interest in the Unicorns, but it has not identified any of them.
“Negotiations are still ongoing, and it won’t be long before the future of the Unicorns is determined one way or another,” Lee Sang-il, deputy secretary general of the KBO, told the vernacular Sports Seoul last Tuesday. “Should all negotiations fall through, the KBO will take control of the team [for 30 days maximum] and we will begin looking for new ownership again.”
There are two ways for the league office to rescue a beleaguered team. One is for the KBO to run the team, much the way Major League Baseball managed the Montreal Expos in 2003 and 2004.
The other is to allow the team to borrow from the KBO’s emergency fund. In 1999, the Ssangbangwool Raiders from Jeonju, North Jeolla province, borrowed from the fund, but the team eventually disbanded in early 2000. The SK Wyverns, now based in Incheon, retained the contracts and took over operations of the team that spring.
Meanwhile, the Unicorns’ coaching staff and players are going about their business as usual. Some pitchers are attempting comebacks of a different sort this season.
Lee Sang-yeol, a lefty reliever, returns from his two-year military service this year. He left the team in 2005 after posting an earned run average of below 3.00 the previous two seasons. When the Unicorns need to get a left-handed batter out in the late innings, the coaches will look to Lee in the bullpen.
Im Sun-dong, who led the league in wins with 18 in 2000 but hasn’t won a game since 2003, is eyeing a comeback. Manager Kim Si-jin has told various news outlets that Im, a right-hander, is throwing his best stuff in three years, although he said Im still needs to improve on his velocity a bit.
Chung Min-tae, a former 20-game winner who has been slowed by injuries, is also working to return to glory after making just one relief appearance last season. Chung is working on a forkball (similar to the split finger fastball, only with the ball jammed deeper between the first two fingers of the pitching hand), and manager Kim also reported improvement in Chung’s pitching this spring.
Kim Soo-kyung, a former rookie of the year, is also trying to redeem himself. Kim, after winning 68 games from 1998 to 2003, notched only 22 victories during the last three seasons. Last season, coming off knee surgery in the winter, he went 4-7. This past offseason, seeking a three-year, 2.5 billion won deal, Kim settled for a one-year, 500 million won contract, which could be extended for two seasons based on his performance.
But the 27-year-old Kim just might be healthy again: He hasn’t allowed a run in five innings pitched this spring, striking out five. In a press release from the team after the Florida training was over, manager Kim said the mood “was excellent” throughout the camp despite obvious distractions surrounding the team’s future.
“If anything, the situation has made us tighter, and made us play harder,” Kim was quoted as saying. “Our uncertain future has given the players a new perspective on their career and the franchise, and made them appreciate the team even more.”
Kim Yong-hui, the team’s president, last week he told Joynews 24, an online news outlet, that “there will be no disbanding” of the Unicorns, and that he would not trade players in exchange for cash this season. “We’re looking at different ways to survive, and breaking up of the team is not one of them.”