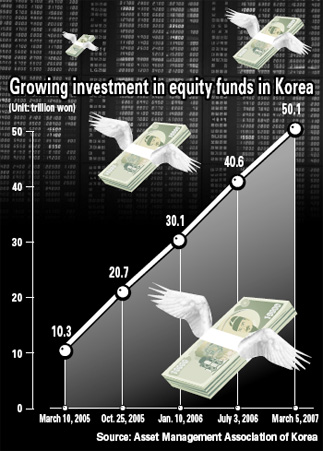 The accumulated investment in Korean equity funds hit the 50-trillion-won mark ($53 billion) on March 5, seven months after topping 40 trillion won. Having overcome the ups and downs in the stock market, most recently the bubble burst in China that dragged down the Kospi, equity funds have established themselves as a pillar of the Korean stock and capital markets.
Or have they?
Retail investors have driven equity funds to dizzying heights. Because of the low interest rate previously unseen here, investors are seeking other ways to save and invest, and equity funds have been their primary choice. But experts say that while the size of the fund market has grown exponentially, the substance is still not there.
“There are still too many investors who jump on bandwagons based on previous return rates,” said Yoon Tai-soon, chairman of the Asset Management Association of Korea. “That’s one of the issues we have to resolve [to become an advanced market for funds].”
The sheer growth of the equity fund market is significant. In the first two months of 2007 alone, the accumulated investment in fund products jumped nearly 4 trillion won. And in January, equity funds passed bond funds as the most popular funds in Korea. A robust overseas market earlier in the year was a key contributing factor. And even though it has not passed the National Assembly, the government’s proposal to offer an exemption on capital gains tax on foreign equity funds also helped with the ocean of cash flowing into equity funds.
A driving force in the equity fund buildup has been accumulative funds, or the type that investors put money into periodically. According to the Asset Management Association of Korea, accumulative equity funds had 22.7 trillion won in investment at the end of January. That’s nearly 45 percent of all investment in equity funds.
Despite the substantial growth, Korea’s fund market trails others in size and return rate.
The United States, the world’s largest fund market, boasts 568.2 trillion won in accumulated equity fund investment.
Korean fund returns have not been as solid this year. Local fund appraiser Zeroin said average returns for equity funds in 2005 were 63 percent, but the figure nosedived to just over 1 percent in 2006. Due mainly to the Chinese stock market crash in February, the equity funds’ return rates were in negative territory through Wednesday. Zeroin senior executive Choi Sang-gil said the crash in China had fallout globally.
Investors chasing short-term returns have created a lopsided market. So far this year, a large amount of investment has gone into foreign equity funds, especially in emerging markets such as China and India.
According to the Asset Management Association of Korea, investment in Korean equity funds fell 178.5 billion won, whereas money in overseas equity funds jumped by 3.6 trillion won.