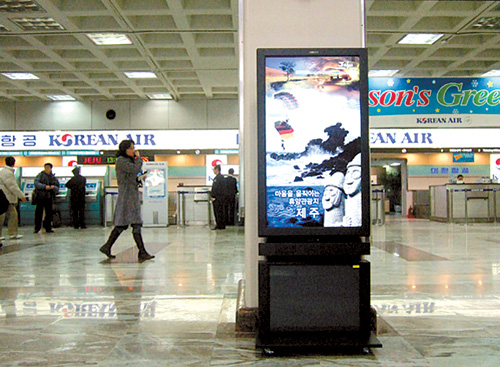 A digital signboard made by Diboss at Gimpo Airport reflects the company’s recent efforts to seek new profit sources. Provided by the company

Despite growing sales of flat panel television sets, medium-sized TV makers are turning to other business, such as real estate, or making products catering to business instead of home consumers.
Last year, most medium-sized TV firms recorded their worst performance ever. Because of these losses, they are repositioning themselves and seeking different profit sources.
Most recently, KDS announced that it will go into the housing construction business. It has secured a site in Tongyeong, South Gyeongsang province, and is planning to build an apartment complex there. To do so, the construction company Samyang Co. was brought in as a major shareholder. The company hopes to profit from the sales of the housing units and related TVs, since the units come with built-in appliances.
Also pursuing a different business is Digital Device, which acquired a Russian oil developing company. Then there’s Woosung Nextier, which jumped into the light-emitting diode (LED) back light unit business.
Other firms are trying to make more LCD products that are not consumer TVs. Diboss Co., a liquid crystal TV maker, decided to whittle down its consumer LCD TV business and focus on other products that use liquid crystal displays, such as digital signboards. It is customizing flat panels for bulk orders from hospitals and hotels. Sales from these businesses raised 43.5 billion won ($463.7 million) last year. It hopes to increase that figure this year to 91 billion won.
The company also made a major adjustment last year in the proportion of TVs it produces ― increasing those made for business. This year, the company will expand commercial-purpose TVs from 69 percent to 92 percent. Atec will diversify as well. It used to focus on LCD TVs and monitors, but this year, it will cater to the industrial market.
The main reason for their bad performance was because the price of digital TVs plummeted. Most flat panels sold in Korea were from big names like Samsung, LG, and Daewoo Electronics.
“The overall price of liquid crystal display and plasma display panel TVs has dropped so much compared to 2005. It’s affecting the smaller companies because people prefer big brands like Samsung and LG,” said Kim Jeong-hun, a spokesman for Woosung Nextier.