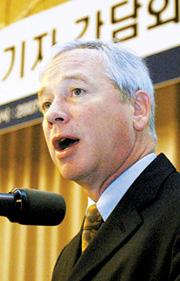 Stung by two years of losses, Ssangyong Motor Co. said yesterday that it will add up to five cars to its lineup over the next seven years, following sluggish sales for its sport-utility vehicles.
Philip Murtaugh, chief executive of Korea’s fifth-largest automaker, said the future of SUVs is uncertain due to global environmental concerns and ensuing regulatory issues.
“I realized that Ssangyong had to make a significant change in business strategy if we were to succeed in the long term,” he said, adding that Ssangyong’s focus has been on premium SUVs.
“Any company depending solely on selling SUVs will be in trouble, as the global auto industry is facing higher concerns about the environment,” he said. In the sedan segment, Ssangyong sells only the Chairman, a large sedan introduced in 1997.
“The most popular model in Korea is the 2-liter and we will unveil 2-liter models here,” Mr. Murtaugh said.
The chief executive said Ssangyong Motor and its parent, Shanghai Automotive Industries Corp. (SAIC), will jointly develop five auto platforms to serve as a base for up to 30 models within the next seven years, with five new engines. Along with the new sedans, Ssangyong will add two multipurpose models to its lineup.
Two years ago, Shanghai Automotive Industries, China’s No. 3 automaker after First Automobile Works and Dongfeng Motor Corp., acquired 51 percent of Ssangyong.
Mr. Murtaugh said Ssangyong is awaiting approval from the Chinese government to set up a joint venture with SAIC to build cars for the China market. He said the 25 percent tariff on imported cars in China makes it mandatory to produce domestically.
With a beefed up lineup, the carmaker aims to achieve sales of 330,000 units a year by 2011, almost triple last year’s figure of 121,196.
The sales revenue target is 6 trillion won ($6.4 billion), up from last year’s 2.9 trillion won. To reach that goal, Mr. Murtaugh pledged to set aside 8 percent of Ssangyong’s annual sales revenue for research and development.
Last year Ssangyong sold 24 percent fewer vehicles. SUV sales were hurt by higher diesel taxes. By 2011, Mr. Murtaugh said Ssangyong aims to become Korea’s No. 3 automaker.