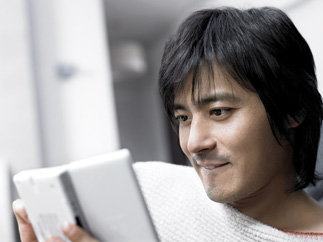 Actor Jang Dong-kun plays a brain-training game in an advertisement for Nintendo’s DS Lite. His brain age is 58. Provided by the company

This is not a game, it’s brain-training.
Forget getting to the highest level in the latest release of Counter-Strike, in intelligence-obsessed Korea, so-called “brain-training” games are the latest fad. The games are available on a wide range of platforms and aim to keep the mind young, leading gamers to ask, “How old is your brain?” Game developers are targeting a wide range of customers, from young children to the elderly, pitching games as a way to keep the mind supple.
The flame was lit by Nintendo Korea, which released “Brain Age,” its first Korean-language game, two months ago. The game sold 32,000 copies in just the first week and is a continuing top seller; it has even been promoted as being helpful in preventing dementia.
With the start of the new school semester, a wave of brain-training games, mostly for mobile phones, have entered the market. Nate, a mobile service of SK Telecom, has a separate category for brain training under its mobile games section. One game specifically trains the right side of the brain; another claims to boost agility and intuition.
Nexon Mobile, Com2us Corp., and Gamevil are some of the many companies developing brain-training games. “These games are particularly popular because children have an excuse for playing them,” a Gamevil spokesman said.
Specialists note that while mental exercise games are in vogue globally because of the Japanese number puzzle Sudoku, the brain-training craze in Korea is especially hot because of the nation’s fascination with IQ.
Han Jae-woo, head of the Korea Society Aptitude Development Co., a testing center, said that Koreans who test their children think a high IQ leads to high achievement.
Not everyone is sold. “You’d probably get more intelligent by reading books than playing games,” Kim Jin-yeol wrote on a local Web site. “But it’s better than playing war games,” another user argued.