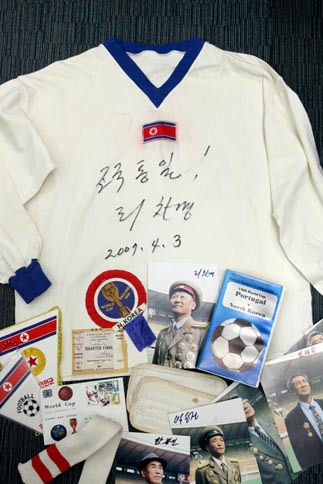 Li Chan-myong, 62, the director of the North Korean youth soccer team, had a big surprise last week when he saw a uniform that a North Korean soccer player wore during the 1966 World Cup games in England.
“Right, this is right. Clearly it is the uniform we wore,” Li said, feeling the cloth. “There are none in the North and I didn’t expect to see one here in the South.”
The North Korean youth team has been training here, in preparation for the FIFA U-17 World Championship 2007 that will be held in South Korea.
Li met Lee Jae-hyoung, 45, a collector of soccer memorabilia, last Tuesday at the Hotel Castle in Suwon, where the youth players were staying.
Li was the goalkeeper for the North Korean team during the 1966 England World Cup, in which the team reached the quarterfinal.
Lee purchased the uniform in 2004, in Britain. The uniform, bearing the No. 10, was worn by striker Kang Yong-un. It was a remarkable experience for Lee to see a soccer shirt that had last been in the possession of one of his teammates 41 years ago.
Li said there are no uniforms in North Korea that had been worn by team members. “The British were fascinated by North Korean players,” he said. “They took all of our uniforms, shoes and socks.”

At the time Li was 165 centimeters tall (five feet five inches) and thus was taller than most other North Korean players, whose average height was 162 centimeters.
The North Korean team fought and beat the Italian team, whose players were much taller. It was one of the most shocking upsets in World Cup history.
“I trained myself to jump higher until I was exhausted and could barely move, so I would be strong enough to overcome our disadvantages,” said Li, recalling the past. “I thought, if I missed the ball, I would embarrass the entire North Korean nation.”
The North Korean team beat Italy 1-0 in Middlesborough, during the last game of group four on July 19, 1966. North Korea became the first Asian country to reach the quarter-finals of the World Cup.
In the quarterfinal, North Korea scored the first three goals against Portugal, but could not stop Eusebio da Silva Ferreira from scoring more. North Korea lost to Portugal 5-3.
“Eusebio’s shooting was the strongest I have ever seen,” Li said. “Portugal was down by three goals by the 24th minute of the first half, and the Portuguese players were upset. I was dizzy because they were driving us so hard.”
Li was a member of the North Korean national team between 1964 and 1975, but he has never played against a South Korean team.
For the qualifying rounds of the 1966 competition South Korea did not participate, because North Korea had a much stronger team.
Lee was given the title “people’s hero” in North Korea. He was the coach for the North Korean team during the 1976 Montreal Olympic Games and led the team to the quarterfinal.
The North Korean youth team began training on March 24 on Jeju Island and has been touring South Korean cities, including Suwon and Changwon, for the last 20 days.
“We have been treated well here and it is very comfortable,” he said. “I hope there will be more soccer-related exchanges between North and South Korea.”