Dancing out from mother’s shadow

Dancing out from mother’s shadow 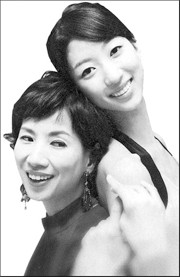 The former first soloist and president of the Korea National Ballet, Choi Tae-ji, 48, seems to have passed her dancing genes to her eldest daughter, Choi Li-na, 21, who recently joined the Boris Eifman Ballet of St. Petersburg, becoming the first foreign dancer in the company’s history.
“She went to Russia last October to join the ballet company,” said Choi senior. “After three months on probation, she became an official member of the ballet company on Feb. 15. Many Korean ballerinas do not persevere after joining foreign ballet companies. But six months have passed and I thought it was time to let the public know that my daughter is doing well.”
Choi Tae-ji introduced her daughter to ballet was she was five.
“When I was the first soloist at the Korea National Ballet in early 1990s, I took my daughter to the practice room. She liked it very much. When she was in elementary school, I took her to the National Ballet School and we would go home together in the evening,” the mother said.
The younger Choi went to study at Canada’s National Ballet School when she was a middle school senior.
In Canada her genes were in evidence and many teachers thought she was talented. The problem was her height. At 180 centimeters, or 5.9 feet, she was rather tall for a ballerina. Male ballerinas were reluctant to dance with her and she experienced a series of disappointments in final auditions. To make matters worse, she hurt her ankle in 2005, just before her high school graduation.
Giving up her dream of becoming a ballerina, she returned to Korea. The turning point came when she met Boris Eifman, who came to Korea last year for a performance.
Eifman told her that there are many tall dancers in Russia and that that her height wouldn’t be a problem in modern ballet.
After a one-year break, she made up her mind, finally joining the 30-year-old Russian ballet company. “My mother was always the standard I had to beat,” she said. “I always felt so much pressure. Someday, I want to be known as ballerina Choi Li-na, not as the daughter of Tae-ji.”