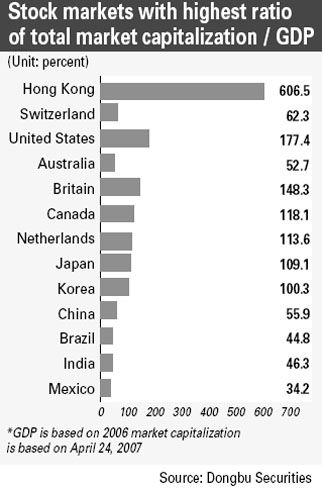 Korea’s stock market and major stock markets around the globe are entering uncharted waters. The Dow Jones industrial average closed above 13,000 for the first time on Wednesday, Eastern Standard Time, and the Kospi has recently been setting one new record after another.
This month, 23 stock markets around the world, including Russia and Mexico, topped their previous records. The Kospi closed 12.36 points up, or 0.8 percent, at 1,557.65 on April 24.
Other Asian stock markets are following that lead. The Nikkei 225 index climbed 1.12 percent, and stock markets in China, Singapore and Taiwan also advanced in April. The Dow Jones industrial average ended at 13,089.89 Wednesday, up 135.95 points, due to better than expected performance by American companies and a large purchase of treasury shares. The Nasdaq increased 23.35 points, to 2,547.89, on Wednesday.
“The ample global liquidity flowing in stock markets and strong economies in the United States and China are leading stock markets around the world higher,” said Lee Jong-woo, a chief analyst at Hanwha Securities Co. Good conditions in Japan and Europe are also adding fuel to global stock markets.
After the free trade agreement between Korea and the United States, there is a renewed interest in Korea’s stock market.
“Global investors who have been quiet about Korean stocks recently began requesting purchases of Korean shares,” said Ahn Seung-won, a senior official at UBS Securities Co., noting that most of the investments from overseas are long term. “They are looking at Korea in a new light since the free trade agreement and the expected upgrade of Korea’s sovereign rate,” he said.
The Bank of Japan and the Ministry of Finance of Japan said in February that they purchased 32.3 billion yen ($322 million) worth of Korean shares.
“Japanese investors who used to buy only American shares began taking an interest in Korean stocks,” said Lee Young-won, an analyst at Prudential Investment and Securities.
Money is flowing to stock-based mutual funds, sustaining the local stock market. The Kospi is fluctuating less than before and is steadily on the rise.
In addition, foreign investors, who sold 11 trillion won ($11.8 billion) worth of shares last year, turned to buying. They have purchased a net 2.7 trillion won worth of stocks this year, as of yesterday.
The total market capitalization of all issues listed, including those listed on the Kosdaq, surpassed 850 trillion won, exceeding Korea's gross domestic product (847.8 trillion won last year) for the first time.
The price-to-earnings ratio, or a measure of the price paid for a share relative to the income or profit earned by the firm per share, exceeded 11 for the first time this month.
“There are more global companies like Samsung Electronics Co. and Hyundai Motor Co. listed on the Seoul stock market, and the market will be considered an equivalent to those in developed countries in a short period of time,” said Shawn Lytle, global equity portfolio manager and team manager at UBS.
“When the sale of stock-based funds slows down and institutional investors start buying, the local stock market is likely to enjoy the long prosperity that took place in American stock markets in the 1980s,” said Kim Se-jung, a chief analyst at Shinyoung Securities Co.