Struggles of Israel, Korea a basis for deeper bonding

Struggles of Israel, Korea a basis for deeper bonding 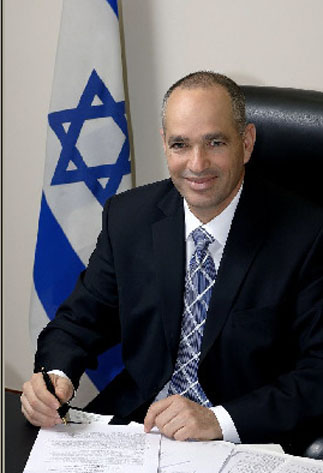 Ambassador of Israel Yigal Caspi: “The only thing that still evades us is peace.” Provided by the embassy

The modern histories of Korea and Israel are some of the most turbulent in the world, which is perhaps a foundation for the growing relationship between the two countries.
At Israel’s national day celebrations at the Millennium Hilton Hotel in Seoul last week, the instability inherent in the Jewish state was evidenced by the imposing metal detectors and the teams of uniformed security guards.
Entering the Israeli celebrations gave a sense of the insecurity that many Israelis and Palestinians must feel on a daily basis, with such checkpoints an intrinsic part of everyday life.
The grand ballroom of the Hilton was humming with dignitaries from Korea and abroad; light glinted off military medals and ambassadors clinked glasses with business leaders as a giant ice sculpture melted in the center of the room.
The wide range of people included Kim Sung-ho, minister of justice; Seong Chang-soon, master of pansori and Intangible Cultural Asset; Dr. Sohn Byung-doo, president of Sogang University; Chang Myung-ho, president of Arirang TV; Lee Hong-koo, former prime minister; and Park Hee-tae, chairman of the Korea-Israel Parliament Friendship Association.
There was a hushed air of formality in the room that deepened with the somber playing of the national anthem of each country before the national flags on the podium, without any singing.
Ambassador of Israel Yigal Caspi then read a statement. He lauded the economic success of his country.
“Small Israel continues to be an economic miracle,” he said.
“Our currency is strong, inflation is low and the stock exchange is breaking records.”
In relation to Korea, he said that bilateral trade increased 15 percent from 2005 to $1.6 billion.
A further sign of the developing friendship between the two countries was the fact that more than 28,000 Koreans visited Israel this year.
“And the numbers are growing every year,” said the ambassador.
He also mentioned that Israel will open a new cultural center in Gangnam in a few weeks.
Referring to the ongoing Israeli conflict with the Palestinians, the ambassador said, “Unfortunately, the only thing that still evades us is peace. There are some positive signs of mutual acceptance which, we pray, will lead us soon to a better future.”
He invited all present to visit his country.
“It is one of the few countries in the world where you can combine three assignments in one trip ― pilgrimage, tourism and business,” he said.