She made it there, how about here?

She made it there, how about here?

The uber-chic fashion boutiques, glimmering skyscrapers and sleek cafes full of fashionable women in Manolo Blahniks weren’t here in the mid-70s. That was when Jean Yu left Seoul with her family as they emigrated to California.
After decades away, the New York-based fashion designer’s memory of her native country had become a vague shadow, but when she returned to Korea to receive the 2007 Avenuel Designer Award she said it “reignited her relationship with her native culture.”
The award made Yu’s parents more excited than when one of her dresses was on the cover of American Vogue in 2004.
“They don’t understand why so many big companies desperately want to have their clothes on Vogue’s cover,” she said.
They say that if somebody can make it in New York, they can make it anywhere, but even though Yu speaks and thinks like a quintessential American, she said her visit here represented a true homecoming.
The Avenuel Design Award was created in March, 2005 when the Avenuel department store first opened in downtown Seoul. Under the guidance of the Lotte Department Store, Avenuel’s parent company, every year a committee consisting of fashion industry professionals selects an up-and-coming Korean-born fashion designer. This year, Shin Young-ja, the vice president of Lotte Department Store, presented the trophy and cash prize of 20 million won ($22,000) to Yu. Last year, Richard Chai, also based in New York, won the award and Eliden, Avenuel’s upscale store-within-a-store, has sold Chai’s collections.
Yu’s small runway show, on the top floor of the department store, offered industry professionals a rare glimpse of her work.
In New York, Yu is best known for her lingerie, but for her Korea show she brought mostly cocktail dresses, decorated with fine silk. They are feminine but far from frilly. When they are layered in soft hues of sandy-beige, to pink, gray and black, they generate a feeling of ethereal lightness. In her dresses Yu achieves an element of grandeur with shapes that are reminiscent of ancient architecture. 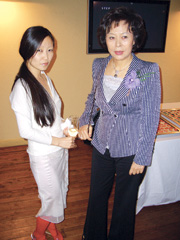 “The dresses are so fragile that when the models put them on or take them off they always damage them,” said the designer, who was dressed in one of her own designs, an ensemble consisting of a white top and a white skirt. Underneath the diaphanous skirt, she wore opaque red tights and a pair of transparent Martin Margiela sandals.
Yu pays obsessive attention to the finest details. She wants her designs to outlast ephemeral trends. “It takes weeks and weeks to make such a dress,” she said. “Mid-century furniture design, like Eames chairs made in the 1940s, are timeless. I search for a great design that can endure. For me the details of construction are most important.”
For that reason, if she were ever offered a creative director role at a fashion house, she would want to work for Vionnet, which was recently revived by Sophia Kokosalaki, or bring back the long-dead Paul Poiret brand, launched by the revolutionary fashion designer who freed Victorian-era women from corsets at the turn of the last century.
Will Jean Yu’s clothes be widely available here, now that she has won the Avenuel award? Unfortunately not ― her fans must fly out to New York, where a cocktail dress costs $3,800 and an evening gown costs between $4,000 and $6,000. “The department store buyers don’t see many Korean women buying such expensive and delicate dresses,” she said.
With a limited understanding of Korean language and customs, she quickly reached her wit’s end as a pack of reporters barraged her with questions like, “What exactly will you, as a Korean designer, do for Korea in the future?” 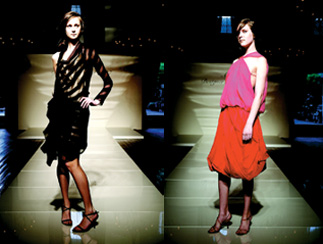 She says that kind of speculation is too grand for her. She’s just happy to be back in her home country after so many years. Covering her legs with a blanket at an outdoor cafe in Cheongdam-dong, she breaks into girlish giggles and declares “I love it, this is very ’80s!”
Sipping a glass of chilled chardonnay, she worried about a made-to-measure evening gown that came out a little too big. She says she has only recently begun to feel better about her retail business and meeting in person with clients, some of whom are international celebrities.
The supermodel Natalia Vodianova, a regular customer, likes to dress entirely in Jean Yu and once told her after a fitting, “Now I’m going to make love to my husband.”
Yu’s Crosby Street shop and studio, 37=1, gets visits from friends of Bodianova, such as Nicole Kidman and Sofia Coppola. Catering to these women’s needs, with only four part-time staff, is a very demanding occupation.
The boutique is only six years old, but her connection to high fashion started at the precocious age of 11, when she began buying month-old Italian and French Vogue magazines for a dollar.
By 14, she had geared up on Japanese avant garde fashion as defined by Commes des Garcons and Yohji Yamamoto. At 16, she worked as a floater in the Bullock’s department store in Los Angeles.
She moved to New York to study at the Fashion Institute of Technology. While there she began selling high-end evening gowns even before she graduated.
“I would just walk into the shop and say, ‘Do you like this?’ and they would buy,” she said.
From now on, she also plans to promote awareness of an eco-friendly lifestyle. She and her boyfriend have set up an online community to develop green projects. 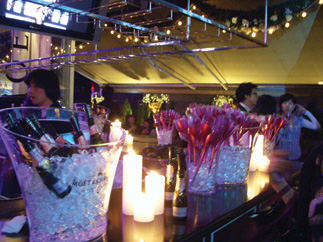 “We come from a generation that is all about buy buy buy; it’s our identity and lifestyle. When someone makes something that’s good for the environment, those products tend to be too earthy for us. We buy things because their design is gorgeous, and why not? In high fashion and high design, there’s no element of eco-friendliness,” she said. “I think big companies in Korea must do something if they want to keep the country as great as it is now.”

There was a field of pink tulips blooming in the middle of Cheongdam-dong last Friday evening, to the amazement of some 200 lucky guests. The occasion was “Flower Rose Night” at the Tell Me About It restaurant. The event promotes Moet & Chandon’s pink champagne and it is an opportunity for people to dress in pink and welcome the warm days of late spring. The event was held for the first time last year.
Created by Moet & Chandon’s Chef de Cave, Benoit Gouez, the 2007 Rose Imperial is perceived as young, radiant and glamorous, the very qualities that Korea’s newly rich strive for.
This year the French champagne master made the classic grande marque with modern accents. Built on the intensity of pinot noir grapes, the fruitiness of pinot meunier and the finesse of chardonnay plus carefully selected reserve wines for consistency, the overall assemblage of the wine creates an intense flavor with hints of red summer berries, floral overtones and some peppery afterlife at the end.