Young dandies on a budget seek out color and style

Young dandies on a budget seek out color and style 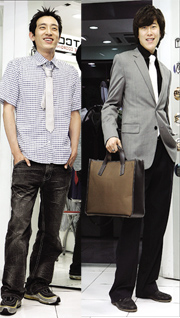 Jang Hye-young is proud that she converted her boyfriend into a style-conscious dandy. The lucky guy, Park Tae-jin, 26, went from an everyday uniform of jeans and a sweatshirt to a varied wardrobe that leans toward pink neckties and pastel shirts. Light purple is a favorite.
Indeed, it has become one of their routines on dates to visit men’s fashion shops. But this young couple is not visiting high-end department stores in search of luxury brands like Giorgio Armani or Ermenegildo Zegna.
Rather, Jang and Park must satisfy their mutual passion for high-style menswear on a limited budget. They scour downtown streets for the easily available brand shops, such as STCO and the Shirts Studio. And Park is not the only young man tending to his style. Bargain brand boutiques have shown steady growth.
The major sales pitch of these men’s brands ― they define themselves as catering to men who want a coordinated look ― is an affordable price and a wide variety of colors and items. Shirts range from around 50,000 won ($53) and ties average about 40,000 won. Rock bottom prices on some shirts are as low as 29,000 won.
With their colorful designs and hip attitude, these budget men’s shops cater to the emerging market of young “metrosexual” Korean men who care about their appearance and are not ashamed of being style conscious ― but still want value.
Baek Myoung-gee, the marketing strategy director for the Shirts Studio, noted that conventional men’s brands, many of them available at department stores, have a built-in bubble in their steep prices to accommodate the commissions paid to department stores and other marketing prices. Baek says the secret for his company is location and style rather than heavy marketing. “We tend to cut down on advertising and we open branch shops around subway stations frequented by young people,” Baek said.
While the prices of the shirts and ties may be low in these shops, they can translate into high profits for the companies. STCO, launched in 2002, reported 45 billion won in sales last year, a major leap from 17 billion won the year before. This year, the brand is projecting sales of 60 billion won. The Shirts Studio, launched in 2004, is enjoying a doubling of its sales growth each year. Baek is happy to be in this moderate end of the market, saying that many well-established brands are trying to make inroads into the realm of affordable and stylish men’s fashion.
The price strategy of these brands also lowers the threshold for young men on a budget who want to become stylish. Kim In-young, a 27-year-old currently without a stable job, said that he appreciates the pricing and he can still satisfy his inner peacock. “I have a limited budget, yet I want to wear nice clothes in bright colors,” Kim said, “So I come to these shops once or twice a week.” Last Thursday, he was torn between a pink-striped white shirt and one with blue polka dots. 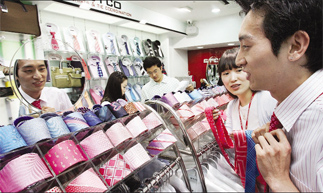 Kim In-young looks for the right tie to go with a new shirt. Kim is one of many young, style-conscious Korean men. By Ahn Yun-soo

Color is a major factor for young patrons of the brand shops. Baek said that the trend is something new for Korea, with young men moving out of the black suit-white shirt salaryman look for brighter colors. “Not too long ago, men used to wear uniform colors of dark blue, black or grey,” Baek said. “Now, they are not afraid of bright colors such as pink and purple.”
A recent visit to STCO and Shirts Studio outlets in Sinchon, a hot spot for young people in central Seoul, revealed a rainbow of shirts and ties on display, with various shades of pink and purple, many of them adorned with flowers or heart patterns, dominating the scene this season.
Kim Eun-seong, manager of the STCO shop in Dongdaemun, explained, “One important character istic of our brand is that we use colors that were once exclusive to women.”
Huh Sung-woo, an assistant manager at Andrew’s Ties, agrees that men’s preference for colors is a new trend, something that began around 2005. Andrew’s Ties launched in 2004 with a focus on colorful ties and shirts, but it faced marketing difficulties at first. “It was hard to break the longtime stereotype of male customers who preferred monochromatic colors for their suits,” Huh said. Now, the best-selling items are purple, orange and green ties, he added.
Huh noted that another change in the men’s clothing market is that the male customers are becoming more active and engaged by fashion. “Many of the customers used to be women who were picking presents for men,” said Kim of STCO’s Dongdaemun branch. “But we have many male customers who enjoy shopping alone.” Baek of the Shirts Studio echoes this observation. “Men used to wear what their girlfriends or wives picked out for them. In shopping, they used to be nothing but drivers or porters to carry the bags,” he said. Now, it’s a different story.
Take Park In-tae, 28, a curator at an art gallery. Park’s strict principle is to always choose his look with his own eye. He said he is quite picky in terms of fabric and color. “What I wear represents who I am,” Park said,.“And I don’t want to look boring. I want to wear pretty clothes and look pretty.”
Aside from color, Park said he was drawn to a variety of slim ties that contrast with traditional attire, a look he borrowed from a Japanese soap opera. The slim tie look is hot now in the brand shops.
Park likes to wear a narrow gray tie with a black shirt, gray jacket and black pants on work days. “At work, it’s sometimes too much to wear, say, a purple shirt with a flower pattern,” Park said. “In that case, I wear a tie to represent my style.”
The trend toward color and flair is not limited to the young. In fact there is a new group of so-called “Dandy Daddies,” who are style-conscious. In a recent survey of 1,897 middle- aged workers taken by the Web site Career Net, 26.3 percent said they were fashion conscious.
“The days when men thought fashion was not their priority are long gone,” said Baek. “Now, men are aware that what they wear is a reflection of how they are living their life and investing their time and money.”