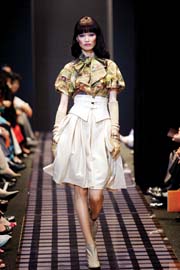 At the Gana Art Center in northern Seoul last week, Daks, a British brand with a long heritage, promised a new chapter in fashion to celebrate its 25th anniversary in Korea, which falls this year.
The company’s fresh new image and its critically acclaimed 2007 fall and winter collection are the offspring of the company’s new creative director, Giles Deacon, and they were first seen at the Milan fashion shows in February.
Daks’ Korea fashion show was presented to 400-plus invitation-only guests and it followed a ceremony in which LG Fashion Corp. and London-based Daks Simpson Group signed a 10-year license agreement. 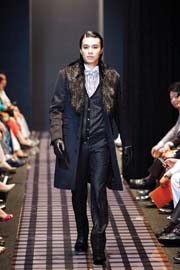 Daks Simpson is owned by Japan’s Sankyo Seiko Co. Ltd, which explained the presence of a group of Japanese businessmen in dark suits who attended the show and the fashion-meets-art exhibition, featuring four Korean artists, that followed.
The Daks brand has been favored by an older clientele, so changing the brand’s image needed time. “With slim arms and tighter pants, we want to attract younger customers, but changing a brand with a long history is not easy because we don’t want to lose our existing customers,” said Akira Sawai, the general manager of Japan Daks Simpson Associates.