Beauty and brains combine for science and charity

Beauty and brains combine for science and charity 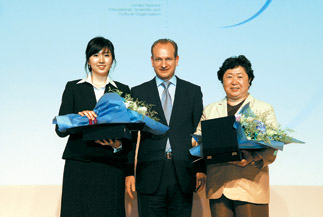 When the country’s most beautiful women offer support for a good cause, geeky subjects like science or charity become suddenly glamorous. Two glitzy functions organized by L’Oreal Korea and SK-II were designed to create greater public awareness of hard-working, dedicated women who are pursuing their own dreams ― and on this occasion, selling cosmetics took a back seat.
To focus attention on its endeavor to support women scientists in Korea, L’Oreal Korea teamed up with UNESCO Korea for its annual award ceremony on June 19. The joint effort resulted in an increase in prize money to 10 million won, or about $10,820, for the winner. At the Shilla Hotel, central Seoul, Jang Mi-hee, a Korean actress, wrapped in a bright red Martin Margiela dress, and Na-na Keum, a former Korean beauty queen in a slim navy blue suit, were seen mingling with scientists, researchers and beauty industry professionals before the L’Oreal Korea chief executive, Klaus Fassbender, announced the winners. This year, Jang was selected as the honorary ambassador of the award; Keum was presented with the Special Award for her role in promoting the biological sciences as a beauty queen and student enrolled at Harvard University.
This year’s Women In Science Award went to Lee Hong-kum, head of the Polar Bio Center at the Korea Polar Research Institute. She is the first woman to lead the institute and she has been recognized for her research in polar marine biology. Three winners of fellowships received 5 million won each: Ha Eun-mi of Ewha Womans University, Kim Jeong-hwa of Seoul National University and Jang Ho-heui of Gyeongsang National University.
Since its inception in 1998 in Paris, the L’Oreal-UNESCO Awards For Women In Science has conferred prizes to 42 winners and given fellowships to 90 recipients in twenty countries each year. The award was introduced to Korea in 2002. “The award aims to improve the position of women in science and young women engaged in promising projects,” Fassbender said.
Last Thursday at the Ritz-Carlton Hotel in southern Seoul, A-list actresses including Jang Jin-young, Kim Hee-ae and Kang Hye-jung, donated clothes and accessories to raise money for young women in need. The bazaar, “My Beautiful Miracle, SK-II,” was the third of its kind this year. Best known for the skin-whitening product called Pitera, which was discovered during the sake-brewing process in Japan, SK-II has become a sought-after brand among Asians. SK-II was introduced here by Proctor & Gamble Korea S&D Co. in 2000.
While SK-II cosmetics sold at about half the usual retail price were flying off the shelves, the burgundy-colored Jang Jin-young gown, specially designed for the bazaar was auctioned off for 2.05 million won. The money raised from the event went to a local charity organization, Beautiful Fund (www.beautifulfund.org).