Nigerians in Korea proud of Cup

Nigerians in Korea proud of Cup 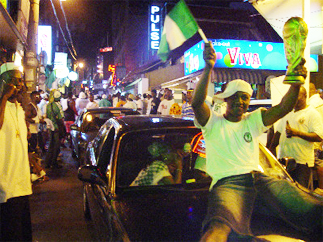 Win anything with the title World Cup and there’s going to be a party junior edition or not.
Nigerian residents in Seoul got loud and proud Sunday night, coming out in force to enthusiastically celebrate the African country’s championship in the FIFA Under-17 World Cup football tournament held in Korea.
Dancing and shouting to African-style drums and horns, hundreds of Nigerians packed a narrow two-block stretch of a back alley in the foreigner-frequented district of Itaewon Sunday night after their national U-17 football team beat Spain 3-0 in a penalty kick shootout to win the championship in Seoul.
The victory party lasted several hours and included a parade of cars with flag-waving Nigerians.
Joseph Kone, 33, an employee in a Seoul office of SK Telecom, said it was a huge day for his homeland.
“I have never felt pride as a Nigerian like this before in Korea,” said Kone, who came to Korea in 2004. “Our country won the World Cup where I stay now. This is so nice.”
Also soaking up the atmosphere was Fabian Samuel, a 33-year-old Nigerian who runs a textile business in Itaewon.
He was one of the vocal Nigerian supporters who was able to attend the game in person at Seoul World Cup Stadium.
“I am happy I saw the game live,” Samuel said. “I believe this victory proved that we Nigerians have a lot of good things to show to the world.”
Ground zero for those watching the championship on TV seemed to be Chajenks Delight Restaurant.
Dozens of Africans, mostly Nigerians, in the African-frequented restaurant let out screams of joy as they watched the penalty shootout on television after 120 minutes of scoreless play.
When Nigeria finally prevailed in the shootout, fans in the restaurant struck fists in the air, yelled and overflowed into the street. Many of them danced to African music an employee at the restaurant turned on. Their happiness increased as supporters came back from the stadium and joined them.
Belinda Caldwell, a 26-year-old Australian, arrived from the stadium with her Nigerian boyfriend. She said she enjoyed the way Nigerians celebrate.
“Australians would celebrate this way,” she said. “It’s a really happy time, you know. Congratulations to Nigeria.”
The party did not get out of hand.
“They are not doing anything irresponsible,” Caldwell said. “They are really happy. It is a good atmosphere.”
Choi Dae-young, a 52-year-old Korean businessman, has owned a handbag shop for 20 years located several blocks away from the festivities. He said it was the most joy he had ever seen among the Nigerian community.
“Many Nigerians live here, but this is the first time that I have seen them feel so happy together like this,” Choi said. “It is good to see it.”
Asked about some negative sentiment that Koreans or other expatriates may have against Nigerians, Choi said he does not share it.
“It is true that some crimes here are being committed by Nigerians,” he said. “But I think it’s because many Nigerians live here. There are many good Nigerians as well.”
Amala Udes, a 36-year-old Nigerian businessman, echoed Choi.
“You can find good people and bad people any place in any culture in the world,” Udes said. “It is the same for all. Nigerians are hardworking people.”