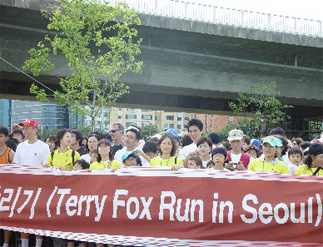 Mark Stevenson and his wife Nancy weren’t worried about their time in the Terry Fox run against cancer Sunday.
Stevenson jogged the 10-kilometer course in Seoul, the third country where he’s run in the benefit race that honors the legacy of Canadian Terry Fox.
The Terry Fox Run is named for the late Canadian bone cancer patient.
It is held in September each year across Canada and in about 55 other countries.
As Chief Operating Officer for PCA Life in Korea, Stevenson has worked throughout Asia, and he completed earlier Fox runs in Malaysia and Indonesia.
Though born in Toronto, Stevenson said the race is not about patriotism.
“It’s not as much a nationalistic thing as a charity for a good cause,” he said. “I’ve always been inspired by his story. It makes you feel pretty humble when you look at what he accomplished.”
Before the race, Duane McMullen, senior trade commissioner at the Canadian Embassy to Korea, told the crowd at Yeouido Rugby Stadium, “We are here together making our contribution to help defeat this terrible disease.”
On Sunday the Terry Fox Run celebrated its 17th anniversary in Korea, and this year there were about 4,000 participants, up from 3,300 last year, according to the Canadian Embassy, an event sponsor.
The turnout was high considering a warning from the Korean weather agency of an approaching typhoon, Nari, which killed 14 people in other parts of Korea on Sunday and Monday.
The typhoon changed direction and there was only scattered rain in Seoul Sunday afternoon.
The majority of the runners in the event ― comprised of 10-kilometer (6.2 miles) and 5-kilometer courses ― were Koreans, and many came in company groups.
Canadians were also visible in the event, including Jocelyn Kaiser, a 25-year-old English teacher from Calgary.
Kaiser said the event is a high-profile happening in Canada.
“I learned about it at school,” Kaiser said while waiting for the race to begin with two friends. “We’ve grown up learning about him ― about what he did and how he helped cancer research.”
Michael Jones from Williams Lake, British Columbia, ran a strong time of 40 minutes in the 10K.
“I went down there to get some exercise among people with positive attitudes and kind hearts,” said Jones, who has taught English in Korea for five years.
To date, more than $400 million has been raised worldwide for cancer research, according to the Terry Fox Foundation.
During the effort by Fox, which he called the “Marathon of Hope,” Fox ran on one leg about 5,373 kilometers (3,339 miles) across Canada to raise money for cancer research.
His journey, however, came to a halt at about the halfway point when his health deteriorated in 1980. He died the next year at the age of 22.
The Canadian Chamber of Commerce in Korea introduced the Terry Fox Run to Korea in 1991 and has hosted the annual event since.
“It is such an inspiring story,” said Terry Tuharsky, chairman of the Canadian Chamber of Commerce in Korea.
“We just have to do it every year.”
Tuharsky has run every year since 1999. He said the run continues to grow in Korea.
Philippe Poggianti, a French employee of LG-Nortel, a Korean-Canadian company, said he ran for his Korean boss, who is recovering from cancer.
“It’s very personal to me, because my manager had cancer last year,” Poggianti said after completing the 10-kilometer run with about 50 coworkers. “We ran to support him,” Poggianti said.
The Canadian Chamber of Commerce said about $75,000 was raised. It will be donated to Youngdong Severance Hospital in Seoul.