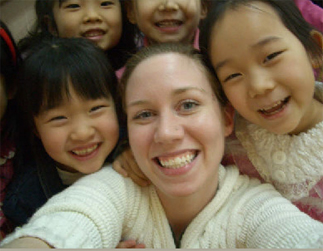 Having run the gamut of foreigners in Korea from actor to sausage maker, this column would be remiss if it did not take a look at that most ubiquitous of expat creature ― the English teacher.
Monique Pyman’s story begins like many a teacher’s tale: “I wanted to travel and I didn’t have money. I knew that they would pay for my flight over and that I would have a job set up,” she said.
The 29-year-old Torontonian did not experience the Korea-induced malaise covered in most introduction manuals to the country.
“I liked it as soon as I got here. I didn’t have any big culture shock,” she said. “Everyone was really nice and helped out a lot. People do stare at you a lot, but you get used to it. You start doing the same thing, like if there’s a foreigner, you say, ‘Hey! There’s a foreigner!’”
A University of Western Ontario graduate, Pyman started working at a hagwon in northern Seoul. She moved up in the world and now plies her trade at Bangbae Elementary School south of the Han River. “For me, the most difficult thing is disciplining the kids. They don’t listen to me. They’re mean,” she jokes.
While some teachers express discontent over their jobs here, Pyman, who has been here for two-and-a-half years, has made a smooth transition.
“I really like living in Korea,” she said. “You can do a lot of traveling to countries close by, and even traveling within Korea is great.”
Her favorite thing about being an English teacher?
“I like the kids,” she said. “Not all of them, obviously, but I like the kids.”
By Richard Scott-Ashe