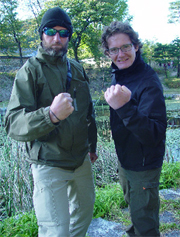 When Roger Shepherd began hiking on Baekdudaegan, a mountain range on the Korean Peninsula, in May of last year, he never expected it to be more than a one-time break from his job as a police officer in New Zealand.
On a month-long vacation, the 41-year-old walked halfway along the range from the southern tip of the peninsula and found the journey to be lovely.
“No less beautiful than famous hiking areas in the world,” Shepherd said.
For Shepherd, it was worth doing the entire hike again ― only this time recording every detail of the mountains and trails to let the world know about the little-known area. The objective: information in English about the region.
He talked about the idea to Andrew Douch, 30, a fellow New Zealander he had befriended in Korea in 2000. The two Kiwis next found David Mason, an American expert on the Korean mountains, to be the organizer and advisor of the expedition, arguably the first hiking project by non-Koreans over the entire length of the range.
More than a year later, Shepherd returned on vacation last month to begin the 70-day project with Douch, an English teacher in Korea.
Their journey began at Mount Jiri, then went upward to Mount Kumgang, the only access point to North Korea on the range. Last week the two hikers finished two-thirds of their expedition on schedule. Local residents, the media and Korean government representatives celebrated the feat in a temple in Yeongju, North Gyeongsang.
At the reception, when asked about the warm welcome, Shepherd said, “We New Zealanders are pretty low-key people.”
The two stayed in Buseok temple on Saturday, the 49th day of their journey, for media interviews and a temple-stay program.
“We are glad that Koreans are reacting to what we are doing, because we think it is a good thing, and people agree that it’s a good thing,” Shepherd said. “We do feel like pioneers. We are pioneers of Baekdudaegan for English networking.”
Baekdudaegan, meaning great ridges, is a 670-kilometer (416- mile) long mountain range that runs from Mount Baekdu in North Korea to Mount Jiri in South Gyeongsang. Many of Korea’s highest peaks and the source of all of the nation’s major rivers are within the range, which some call the backbone of the peninsula.

Mason, a tourism professor at Kyung Hee University in Seoul, said that 20 years ago he saw Baekdudaegan’s potential to be internationally known as a long-distance trekking route like the Appalachian Trail, Sierra Crest Trail and the Great Wall of China.
“I thought this would be a great benefit for Korean tourism as a long-distance hiking trail that is full of Buddhist temples, shaman shrines and Confucian shrines,” Mason said. “It could be really amazing as a hiking experience. We can promote this and help make Korea famous, but nobody really took the lead in the Korean government.”
Then Shepherd and Douch appeared at his door at just the right time, Mason recalled.
Mason suggested the idea of the project to the Korean government through Dho Young-shim, a member of the board of directors of the Korea Tourism Organization. The government promised to give support in publishing the books that Mason will write based on information gleaned by the two hikers.
“Two gentlemen spending 70 days in the mountains ― it’s a lot of commitment,” Dho said at the temple while explaining her support of the expedition.
A program host at Arirang TV, an English-language TV channel, Dho is also a special adviser to the secretary-general of the UN World Tourism Organization.
The hiking expedition, Dho said, is a gauge for the Korean tourism authority to decide whether to develop the route as a main tourism project of the nation, which struggles when competing with neighboring tourism giants Japan and China.
“What we are trying to give to the world through the project is the idea that yes, Korea has beautiful mountains one can hike,” Dho said. “We want to publish books and we would like to see if we can make this a tourist destination. In other words, we want to see whether we can make hikers in the world take an interest in this hiking trail and encourage them to come and try it.”
The hiking expedition itself has had no major problems so far, the hikers said, except for difficulties finding water.
Sometimes, their bags were searched by Koreans suspicious that the foreigners came to pick expensive mushrooms.
Another problem is the simple lack of English information about the area.
“There’s not a lot of English spoken, certainly none in the hills that we were walking,” Douch said. “We can read Korean a bit, but we can’t understand what a lot of stories are about. So we take photos of a lot of Korean information to be disseminated by David [Mason].”
Douch said those challenges, however, pale when they are surrounded by the beautiful scenery in the mountains, which the New Zealanders said is on par with the mountain vistas in their country. Even more pleasant than the natural beauty, they said, is the hospitality of the local people.
Almost everywhere they go, the local residents welcomed the strangers with warm hearts, they said.
“A bit of a rainstorm erupted and we knocked on a door in a really isolated part of Korea,” Shepherd said. “They opened the door and a couple of woeguk sonnim [foreign guests] were there,” Shepherd said.
“But it was not a problem,” Douch said. “After the initial shock, they put trust in people they’ve never met before. It’s great hospitality.”
The New Zealanders said the rest of the hiking project, including the trip to Mount Kumgang, should be finished by early November. 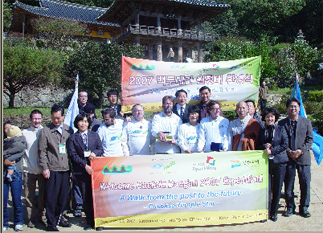 The Korea Tourism Organization held a welcoming ceremony for the two hikers at Buseok Temple in Yeongju. By Moon Gwang-lip