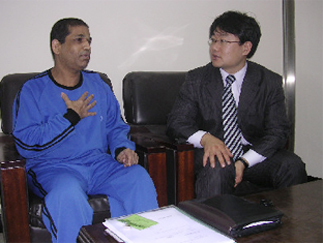 Kim Jong-chul, right, a lawyer for the rights group Pnan, talks with Rana Khan at the Hwasung Detention Center. Khan is seeking refugee status on the basis of religious persecution. By Abraham Ho-Taeg Lee