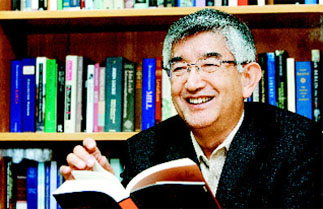 The ruling political party, which should take responsibility for the state of its governance of the nation during the past five years, suddenly disappeared just before its time of judgment. A presidential candidate was nominated through a party primary, but an alternate candidate jumped in the race, splitting the party’s base. This is the reality of Korean politics on the eve of the 2007 presidential election.
Should we see this as a sign of the dynamic nature of Korean society or of the backwardness of Korean democracy?
The JoongAng Ilbo met with Choi Jang-jip, a professor of politics at Korea University, to discuss the relationship between the politics practiced here and democracy.
Noted for his views on the problems of Korean democracy following democratization, Choi recently published a book titled “What Kinds of Democracy?”
Choi’s views originate from the problems inherent in democracy. He said democracy is a system with the key words “representation” and “responsibility”; whether it is good or bad depends on how faithful the system is to the principles embodied in those key words.
According to Choi, Koreans have failed to systematize responsibility, which can only be achieved when the role of political parties is firmly established.
Choi said he was shocked to see how Korea’s democracy had developed because the direction it had taken was not what he expected. The current climate of Korean politics, Choi observed, proves the limitations of understanding democracy only through books. If Koreans today no longer subscribe to a black-and-white division ― “I am democratic, you are anti-democratic” ― such a change can be attributed to Choi, whose views as one of the country’s pre-eminent political scholars exert tremendous influence.

Can you be more specific?
After democratization, the only change was that we got to select our government leaders through democratic elections. The key to democracy, however, is the relationship between representation and responsibility. Representation means that multiple political parties articulate various interests and conflicts within society and through elections form an administration and a National Assembly. Democratization has partially achieved this, but there is more to democracy; elected representatives failed to pay attention to assuming responsibility for their decision-making and implementation of policies. The governance methods of democratically elected governments showed little difference from the authoritarian governments of the past.

Explain assuming responsibility.
Responsibility can be understood as a process wherein an elected representative explains and persuades the people about an important policy or a political issue ― a process wherein the people evaluate the decisions of their representative and demand that he implement or change the policy. Under an authoritarian regime, such a process cannot take place. That is the difference. It is not democracy when the president does whatever he wants to do because his administration was created through an election. He should not be an elected king.

Is there a way to realize responsible politics?
In reality, the clearest way is voting in the elections. And it is critical to vitalize party politics so that elections can be guaranteed representation and responsibility. A political party must perform its role as a channel to communicate, coordinate and maintain tension with the government in our society. Additional organs monitoring the government’s budgets, projects and tax spending can be created, and the people should supervise them. The government should also make public various information it has been monopolizing. There is a lack of data for evaluating our government.
Koreans are more interested in economic issues, which are directly connected to their daily lives, than democracy.
The current sentiment on the eve of the presidential election has been created within the framework of competition under poorly functioning party politics. Look at the example of the United New Democratic Party: It illustrates the importance of systematizing party politics. Failed party politics has created the current state of public opinion.

Your views are quite unusual among progressives here.
The view of the progressives toward Korean politics is different from my view. I think the practice of democracy during the movement for democratization and the efforts to create good democracy after democratization are different. People often think it is progressive when we talk about realizing democracy and conservative when we talk about procedural democracy. However, the problem of Korean society today is caused by the failure to develop procedural democracy, where representation, responsibility and party politics should play key roles.

Has your ideological stance shifted slightly to right?
Not really. The political party system of Korea today has failed to reflect the public’s real opinions. It is concentrated too much on conservatism. It should be Korea’s key task to resolve welfare and labor issues amid the globalization of neo-liberalism.

How do you view the recent rise ofthe favorable evaluation of the past authoritarian regimes?
It is a reaction to the current administration’s failed policies. When you evaluate socioeconomic results without taking into account the political process of a democracy, then you will think it had been better during the authoritarian regime. Democracy and authoritarian rule cannot be compared by looking only into economic outcomes.

What is your prediction on the coming presidential election?
I am not interested in which party wins the election. No matter who becomes president, I hope the issue I have raised will be addressed to further develop Korea’s democracy.


Choi Jang-jip is a political scholar and a leading figure among progressive Korean intellectuals since the 1980s. He served as the chairman of the policy planning advisory committee under the Kim Dae-jung administration. He is critical of what he calls the amateurism of the young politicians and policies brought in by the Roh Moo-hyun administration. A graduate of Korea University, Choi earned his doctorate at the University of Chicago.