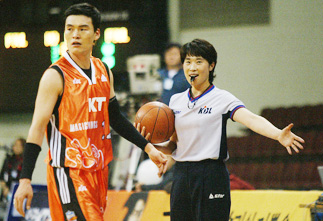 Park Youn-sun, the first female referee in the Korean Basketball League, makes a call during her first match between KT&G and KTF on Nov. 13 at Anyang Gymnasium. [NEWSIS]

Park Youn-sun would rather be running down the sidelines of a basketball court than walking down the aisle.
“Of course marriage is important, but my priority is to stand on the court as a referee,” said Park, 35, the first female referee in the Korean Basketball League.
Park worked her first game last week, the match between the KT&G Kites and KTF Magic Wings on Nov. 13 at Anyang Gymnasium.
Although the KBL was launched 10 years ago, until now no women had passed the league’s rigorous selection process. The women’s league, WKBL, has female referees.
Park was shaking before her debut match. “Did I look nervous?” she asked.
The game was rough. In the second quarter, a KT&G player touched the ball before it went out of bounds, but Park, who was standing right next to the player, called the ball for KT&G. But when KTF strongly objected, the other two referees overturned Park’s judgment. “I admit that I made a mistake,” she said. “It’s only right to correct mistakes.” She added that bad calls can often happen.
Park is no stranger to the court. After graduating from Duksung Girls’ High School in 1991, she played as a member of the Commercial Bank’s basketball team for two years. Since then she has worked as a community center coach and also the head of administration at the National Association of Basket for All. She also has four years of professional refereeing experience at the WKBL.
Park played only two years semi-professionally, but she has no regrets. “I was out of the spotlight during my athlete days,” she said, “but now everybody is concerned about my movements, even minute ones.”
The referee said she is much happier on the sidelines of the big league rather than in center court as a semi-pro player. “The professional stage is everybody’s final goal, isn’t it?” she said.