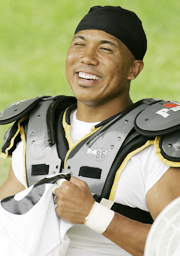 Half-Korean Super Bowl MVP Hines Ward donated $50,000 to a local charity organization to set up a fund to help underprivileged biracial children here, the Beautiful Foundation announced yesterday.
Titled the “Hines Ward Helping Hands Korea Foundation,” the fund will be a separate fund of the Beautiful Foundation. Ward will discuss it when he visits Korean next year, according to the organization.
Ward, the son of a Korean mother and an African-American father, became the role model of biracial children in the country after he catapulted to fame as the most valuable player of the 2006 Super Bowl.
His visit last year boosted national awareness of decades-long discrimination against biracial Koreans. Last May, Ward announced at a press conference that he would donate $1 million to establish a foundation to help biracial children suffering from poverty and discrimination.
Ward decided to establish a partnership with the Beautiful Foundation instead of setting up his own foundation “after much hard work, frustration and creativity on the part of my management team,” he said in a press release the organization distributed yesterday.
“The Beautiful Foundation is well known for its philanthropic work, and since it is a community foundation it has the resources necessary to assist me in my own efforts with the underprivileged and biracial kids of Korea,” Ward said.
He also set up a charity fund in the United States last year in conjunction with the Pittsburgh Foundation to provide programs and services to underprivileged youths in Pittsburgh, Pennsylvania. He is currently playing as a wide receiver of the Pittsburgh Steelers.
Ward said he plans to visit Korea during his offseason with some teammates to hold football camps for children.
He also hopes to create an annual event in which he would invite a group of biracial Korean children to one of his football games in the United States.
Last December, Ward hosted eight South Korean biracial children at one of his games in Pittsburgh.
Hines cited his obligation to his team and new coaching staff as the reasons for his absence yesterday at the announcement of his foundation.
Park So-young, an official at the local foundation, said, “Mr. Ward and the foundation will work to promote the fund and keep receiving donations from individuals and companies.”