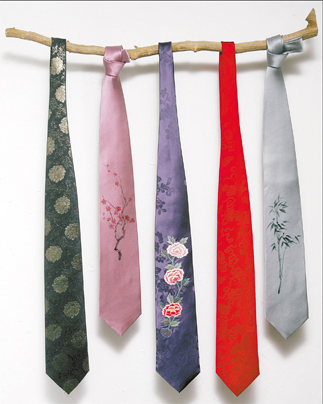 Handmade silk neckties from Pattern of Heart in Insa-dong. By Kang Uk-hyun

For years, N Seoul Tower on Mount Namsan had stood as an uninspiring landmark in Seoul, frequented by elderly citizens and teenage gangsters. But when it reopened in 2005 after months of renovation, it had achieved a remarkable makeover.
But one last part of the overall facelift needed fixing: the souvenirs and knick-knacks on sale at the gift shop.
To create a fresh range of products and to revamp the tower’s rather old-fashioned image, staff hired the stationery design firm mmmg.
It was an ambitious project. New items included “mini three stars” ― a series of mobile phone straps, keychains, postcards and water balls made into eye-catching characters based on the three trademarks of Mount Namsan: the tower, the cable car and a city bus that runs across the road in front of the tower. 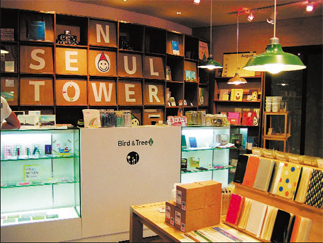 As part of the plans, the souvenir shop replaced postcards depicting random pictures of the city’s palaces and temples with dynamic shots of N Tower taken by professional photographers, drawings of Seoul’s major landmarks and pop-up greeting cards ― when you flip open the cover, a paper cutout of Seoul’s skyscraper pops up.
The response to the designer-made souvenirs has been beyond expectation. In less than a year, mmmg has started selling their N Tower series in the company’s flagship store in Insa-dong, the traditional arts and crafts district in central Seoul.
“Our work has gotten a lot of attention from young people who like to collect new designs,” says Park Wony, a senior analyst with CJ NCity. “I think the way we tied in tradition with a modern item caught people’s interest. We have a broader vision of souvenirs, which is not just centered on the tower but the overall imagery of the surrounding landscape, like the views of Seoul and the skyscrapers.” 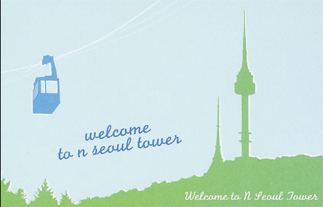 This marks a dramatic shift away from the way Korean souvenirs are usually designed and sold. Those old souvenirs are noted for being tacky merchandise that’s plastered with stale images of random historic icons.
“There is an increasing awareness that the design of Korean souvenirs lacks originality,” says Ahn Cheol-hwan, the marketing coordinator of the souvenir development team at the Korea National Tourism Organization. “There still aren’t enough items in Korea that accurately reflect the country’s identity. But we’re catching up fast.”
In other areas, fashion items here are increasingly using traditional ingredients to cook up modern designs.
A print logo of the Saemaeul Movement, a national project that was aimed at improving living conditions in rural Korean villages during the 1970s, has been made into a vintage T-shirt, and it’s selling fast at online shopping malls.
Last year, LG Electronics launched “Shine Designer’s Edition,” the company’s black-label mobile phone series. Uniquely, the casing has been designed by Korean fashion designer Lee Sang-bong, who engraved Yoon Dong-ju’s poem “The Night Counting Stars” on the back cover.
“Hangul [the Korean alphabet] is full of design potential,” said Lee, who applied the same concept to his clothes designs. “It’s an icon that matches with fancy products.”
Smaller shops and emerging designers are catching on quickly. Yezi:n, a designer jewelry shop, which has a branch in the Shinsegae Department Store in Gangnam, southern Seoul, recently released a jade series using modern designs focused on an “Oriental concept.” And the designer Lee Geon-maan specializes in wallets, belts and handbags that use Hangul to express feelings about fashion. 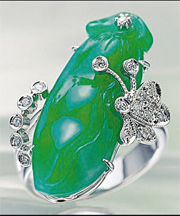 The jade jewelry by the designers at Yezi:n.

Pattern of Heart in Insa-dong has recently opened a store in Samcheong-dong, central Seoul, that specializes in handmade silk neckties that use colors and patterns from traditional Korean clothing.
“The differences are in the type of materials and their finishing,” says Jo Hyeon-ju, a marketing officer at the Korean Craft Promotion Foundation. “Premium designs are vital for survival,” Jo says. 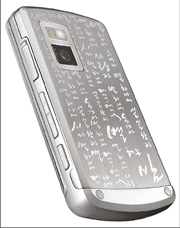 The new LG phone series designed by Lee Sang-bong and