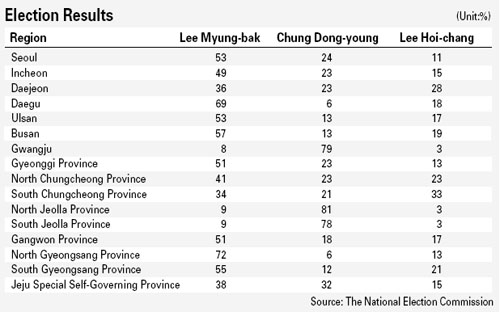 Lee Myung-bak won the presidential election with the largest margin in the country’s history, about 5.31 million votes.
Lee, of the Grand National Party, swept every province across the country except two, the Jeolla provinces. He also lost the city of Gwangju. About 80 percent of the voters in those places chose the runner-up, Chung Dong-young, of the United New Democratic Party. Chung hails from that region, a traditional liberal political stronghold.
Lee won 11.4 million votes, 48.6 percent of total votes cast. Chung Dong-young received 6.17 million votes, or 26.1 percent.
Lee swept all 25 districts in Seoul, earning almost 60 percent of the votes from the residents in the “bubble seven” districts ― Gangnam, Seocho, Songpa and Yangcheon in Seoul, as well as the new towns in Bundang, Pyeongchong and Yongin in Gyeonggi Provice. The “bubble seven” got their name due to a steep appreciation in home prices there in 2006 and because the Roh Moo-hyun administration targeted the areas with property tax hikes.
Lee won 53 percent of votes in Seoul, while Chung recorded 24 percent. It was the complete opposite of what happened five years ago.
In the 2002 presidential election, for example, Roh, the presidential candidate of the governing New Millennium Democratic Party, won 58.4 percent of votes in Seoul’s Gwanak District while Lee Hoi-chang earned 37.2 percent.
This year, Lee Myung-back won 45.7 percent of votes in the district while Chung Dong-young got 29.1 percent. Independent Lee Hoi-chang captured 12.3 percent.
“People who experienced the last two liberal administrations deeply felt the need to change the leadership,” said Kim Min-jeon, a professor at Kyunghee University.
In the Gyeongsang provinces, Lee won a landslide victory over Lee Hoi-chang.
More than 70 percent of votes in Daegu and North Gyeongsang Province went to Lee Myung-bak, while Lee Hoi-chang won less than 20 percent. Observers say former GNP chairwoman Park Geun-hye’s endorsement of Lee Myung-bak helped him in the region.
“In past presidential elections, the candidate’s morality was the most important issue, but this year, it was all about the economy,” said Han Gwi-young, an official at the Korea Society Opinion Institute. “Lee Myung-bak had the image of an economic leader with a strong drive.”