Can life lessons be learned while shopping?

Can life lessons be learned while shopping? 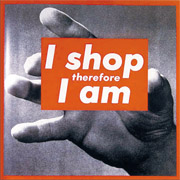 Long before shopping became a cultural subject, the American contemporary artist Barbara Kruger predicted that shopping, instead of thinking, would define the identity of modern consumers.
She created a famous art poster bearing a dynamic slogan that read, “I shop, therefore I am.”
Messages that lure, rationalize and praise the art of shopping surround residents 24 hours a day on the streets of Seoul.
They are everywhere.
Shopping is no longer a simple act of buying, say several recent books on the topic. The images that package the product becomes the identity we are trying to capture. It conveys our desire to belong and mark ourselves as distinct from others.
The brands we wear are conduits for the image we present to the world.
That’s how we define a college student with an ipod player, a young female office worker drinking Starbucks or an elegant curator with a Hermes scarf wrapped around her neck.
Style, we are told, defines our being.
Our lifestyle choices define who we are as well, whether it’s a housewife who insists on an organic diet or a little boy running down the street in his Nike running shoes.
Neil Boorman, an event promoter in London, was a brand addict. He, too, was a person who believed that a Mac computer would naturally be an art-minded person.
He stuck to drinking Evian water, because of its clean and elite image. When he needed to create a strong impression, he picked out his Ralph Lauren polo shirt from his closet.
But one day he decided to hold a public performance, where he burned his designer wardrobe and luxury brand accessories in central London. His Gucci shirt, Burberry coat, Adidas running shoes, a vintage Swatch, a Louis Vuitton wallet and even his BlackBerry phone were set to flame on the city streets. It was “a bonfire of the brands,” as he dubbed it.
The event was a ritual sacrifice to inform the world about brand addiction, consumerism and the injustice of advertising in a contemporary society.
Six months before the ritual, he posted his idea on his own blog and spread the news. It quickly attracted publicity. The BBC reported the bonfire live.
His testimony from the experience was put together in the book, “Bonfire of the Brands,” which came out in Korean under the title “How I Learnt to Burn Louis Vuitton.”
But irony stepped in as the author waited for his baby to be born.
He fell into a dilemma again. If he kept his principles of boycotting fast-food meals or brand-name goods, it was likely that the child would lose the status symbols that would be crucial to make friends with his peers.
In the book, Boorman recalls the time when he was scolded by friends because he didn’t have a pair of Adidas running shoes and a Puma backpack.
The basis of his dilemma, it turns out, points to the root cause of brand addiction for most ordinary consumers of our society.
“Philosophy of Shopping” is a book that delves into the issue. It’s a collection of essays by a French philosophy teacher, Frederique Pernin. The author defines brand addiction as “a symptom of illness in a destructive modernity.”
The book argues that in a world full of social fragmentation, shopping plays a large role in one’s life, because it’s a way to empower people and to help them create their identity.
The fear of freedom often allows modern consumers to be lured by the joy of shopping, it says.
The author writes that the identity of a modern individual is defined by what he wears, because a fragmented individual enjoys shopping to take advantage of a fragmented reality.
It might sound like a statement of surrender to a modern consumer society. But in a society where money is earned to be spent, no better solution could be offered to provide a rational way of spending.
In Amanda Ford’s “Retail Therapy: Life Lessons Learned while Shopping” and Amy Elliott’s “How to Be a Bridesmaid,” the authors provide a different perspective. They explore shopping as therapy.
They explain that shopping enhances a person’s mood while it helps to develop an intimate relationship with others.
Perhaps in the end, it all comes down to one question: “To buy or not to buy?”