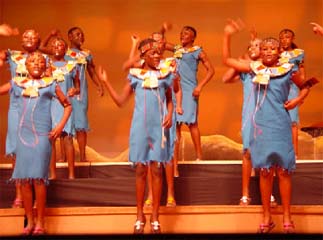 The Jirani Children’s Choir, composed of 83 Kenyan children, sings at the Gwancheon Citizen’s Hall, Gwacheon, south of Seoul, on Jan. 9. By Moon Gwang-lip

Kenya has been a land of heartbreak since Dec. 27, 2007, with post-election violence killing at least 600 people. But a children’s choir from the East African country last week stood on a foreign stage with the message that there is hope for their country.
The Jirani Children’s Choir, made up of 83 Kenyan children aged nine to 16, gave a finale performance in Korea last Wednesday in Gwacheon, south of Seoul, which wrapped up their month-long tour of six Korean cities.
The 80-minute performance at the Gwancheon Citizen’s Hall had many songs about hope and love. But the best message the choir conveyed was the transformation of the children.
The children are all residents of Gorogocho Village, one of Kenya’s poorest slums. None were musically trained. But there they were, singing with confidence and refined voices.
Choi Jong-taeg, a 49-year-old business owner, was one of about 1,000 Koreans in the audience who responded with a standing ovation.
“I didn’t expect them to sing that well,” Choi said. “Their voices are no less beautiful than the Vienna Children’s Choir.”
Kang Mi-kyung, a 41-year-old housewife from Seoul, said knowing the background of the children moved her.
“The children may not be able to have gorgeous clothes, but their voices are gorgeous,” Kang said. “They sound so sincere.”
Jirani, which means good neighbor in Swahili, was created in October 2006 by Good Neighbors International, a Seoul-based international humanitarian aid group. According to Good Neighbors, Jirani is the first children’s choir it founded as part of a relief effort.
It all began with a trip by Rim Tae-jong, one of five board members of Good Neighbors, to Nairobi, the capital of Kenya, in December 2005. There Rim visited Gorogocho Village, where he saw hundreds of children idling on piles of garbage. Gorogocho means garbage in Swahili.
“The children looked so helpless and hopeless that I wanted to do something to help them find hope and stand on their feet,” Rim said after the performance. “They are poor in terms of wealth, but they should not be poor in terms of dreams.”
Rim came back to Korea with a plan to create a choir and searched for a musician to help the project. But few of them showed interest as it meant sacrificing time and money. Good Neighbors does not have sufficient finances to pay salaries, Rim said.
Then Kim Jae-chang, a well-known vocalist and an adviser of the relief group, stepped up, Rim said.
Kim flew to Kenya in July 2006 and recruited children in about 40 schools in Gorogocho Village.
“I felt disheartened the first moment I saw the children,” Kim said. “Their voices were not bad, but they had no confidence and were too shy to sing in public. So I tried to teach confidence rather than singing, because that was what they needed most.”
Brenda Atieno Otieno, a 14-year-old at Sandora Primary School, was one of the children who gained confidence with Kim’s support.
Otieno, who likes American pop singer Beyonce, was watching TV at a neighbor’s house when she heard about the audition.
Another choir member Geoffrey Ochieng Odero, 13, said the choir changed his life.
“I was too shy, but now I am not,” Odero said. “I am happy because we are singing better and better.”
Korea was the first foreign country that the choir visited. Kim said they are planning a global tour beginning in the United States later this year.
“Many Koreans say they were so impressed by these children,” Kim said.
“I was, too. I hope people in the rest of the world can find a smessage of hope through them.”