Some Serbs are angry about the U.S. support for Kosovo’s independence.

Some Serbs are angry about the U.S. support for Kosovo’s independence. 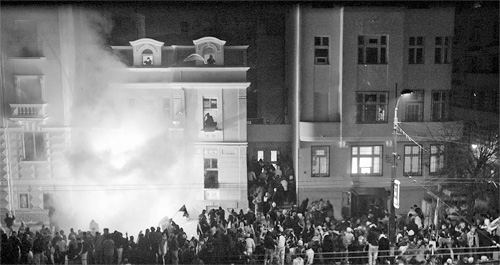 Protesters overran and burned part of the U.S. Embassy in Belgrade, Serbia on Feb. 21 to express opposition to American support of Kosovo’s independence. [Reuters]

Serb rioters stormed the United States’ Embassy in the city of Belgrade last Thursday, making headlines across the world. Where is Serbia, and why did the riots take place? Why did the U.S. embassy become a target?
Serbia is a republic located in Southeastern Europe. It’s in the center of the Balkan Peninsula, which includes countries like Croatia and Bulgaria. Serbia’s capital is Belgrade.
The mob in Belgrade rioted over Kosovo’s declaration of independence on Feb. 17. Once a province of Serbia though administered by the United Nations and NATO since 1999, Kosovo is now home to mostly ethnic Albanians.
This is a sore spot for Serbians, who believe that Kosovo is their nation’s heartland.
The U.S. Embassy became a target because of the American government’s recognition of Kosovo’s newly declared independence. The Serbian government, however, contends that the mob’s attack on the embassy, which resulted in fire and left one dead, is the work of thugs. The American government is accepting this explanation. “We quite frankly don’t believe that this is the face of Serbia,” a White House spokesman was quoted as saying on Feb. 22 by the International Herald Tribune.
The conflict over Kosovo has a long history. Kosovo was one of seven states within the Federal People’s Republic of Yugoslavia, along with Croatia, Serbia, Slovenia, Montenegro, Macedonia and Bosnia-Herzegovina. Each state had a different mix of ethnic groups, languages and religions, yet managed to peacefully coexist under the leadership of Josip Broz Tito, the first prime minister of FPR Yugoslavia. Tito became president in 1953, then was named “president for life” 21 years later. His motto of governing was “brotherhood and unity,” a policy meant to soothe ethnic tensions.
But once Tito died in 1980, Yugoslavia became a hotbed of political, religious and ethnic conflict. The former Yugoslav states had four different languages, three religions, five ethnic groups and many different interests and desires.
Kosovo was not exempt from the rising wave of interethnic tension. Kosovo’s minority ethnic Serb population began complaining that they were being treated unfairly by the majority Albanians.
Slobodan Milosevic, the president of Serbia from 1989 to 1997 and the president of Yugoslavia from 1997 to 2000, used ethnic tension to provoke Serbian nationalism. A series of battles and violence between the Albanians and Serbs ensued during the Balkan wars of the 1990s and the Kosovo War in 1999. Mass killings and attacks on Albanians by Serbian forces prompted more than 1 million Albanians to flee.
As hundreds of thousands of refugees poured into neighboring countries like Italy and Greece, other countries felt pressed to do something to curb the genocidal conflict. North Atlantic Treaty Organization forces finally launched massive bombing campaigns on Yugoslavia for more than two months in 1999 until Milosevic’s Serbia surrendered. Milosevic died at the Hague in 2006 in the midst of a trial for his war crimes.
Why are the Serbs so angry about Kosovo’s independence?
Kosovo has remained relatively quiet for the past eight years under the authority of the United Nations Interim Administration Mission and the NATO-led Kosovo force. During this time, the region was recognized as a part of Serbia.
But after years of debates and negotiations and little progress, Kosovo’s provincial government, largely dominated by Albanians, finally stepped out last week to declare its independence from Serbia with no prior agreement with Serbia or the UN.
The move drew intense fury from many Serbs, whose anguish escalated after the United States and several key European countries like Britain, Germany and France quickly endorsed Kosovo’s independence.
Nearly a quarter million people attended a peaceful rally on Feb. 21 to mourn the independence of Kosovo, Belgrade city officials said. Most of the crowd sang patriotic Serbian songs and chanted anti-Albanian slogans. But several hundred young males in attendance at the rally turned to violence, and set fire to the U.S. Embassy.
While tension escalates over the region, there is no apparent end in sight.
Although Serbian Prime Minister Vojislav Kostunica supported the peaceful rally and has fought on the front lines in the diplomatic struggle to keep Kosovo, he has condemned the violence.
Serbian President Boris Tadic has also spoken out against the violence in Belgarde.
Kosovo’s Prime Minister Hashim Thaci has compared the Serbs’ attacks to the work of Milosevic during his campaign against Albanians seeking independence in Kosovo in 1998 and 1999. Thaci has repeatedly expressed his intent to soldier on with Kosovo’s independence, and many global leaders, including U.S. Secretary of State Condoleeza Rice, support him.
Russia and China, however, are refusing to support Kosovo’s break with Serbia.
The conclusion of this decades-long conflict at the center of the Balkans will probably not be seen over the following months or years. The outcome will depend on the efforts of the people in Serbia and the peacekeeping efforts of international organizations like the UN, the European Union and NATO.