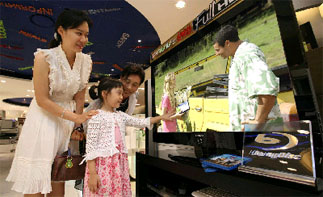 Warner Brothers Studios made a surprising announcement early in the year.
Before the International Consumer Electronics Show, the world’s biggest electronics show in Las Vegas, the studio announced on Jan. 4 it would only release video content in the Blu-ray format beginning in the latter half of the year.
Warner Brothers used to support both formats, but finally sided with Blu-ray.
Samsung is producing next-generation DVD players capable of playing both formats.
Park Jong-woo, president of Samsung Electronics digital media division, was asked his views on the rivalry between Blue-ray and HD DVD formats.
“We will make products consumers want,” Park answered.
Toshiba Corporation, the developer of HD DVD, was surprised by the Warner Brothers announcement and quickly cancelled a press conference scheduled for Jan. 6, a day before the electronics show opened.
The next day, Howard Stringer, chairman of Sony Corporation, the developer of Blu-ray, declared victory. One month later, Toshiba quit manufacturing HD DVD players.
The three-year-long format war had ended at last.
But what is Blue-ray? The technology originated from the compact disc, which uses a laser beam to read and write data.
In 1970, there were discussions to replace vinyl records with a digital audio format.
Sony and Royal Philips Electronics N.V. suggested a compact disc format that can contain 650 megabytes of data on a disk measuring 12 centimeters (4.7 inches) in diameter.
Norio Ohga, then a Sony executive, suggested that all of Beethoven’s Symphony No. 9 in D minor, Op. 125 “Choral,” should fit on a single disc.
The length of the piece conducted by Wilhelm Furtwangler was 74 minutes.
Thus, the capacity of a CD was determined. CDs quickly replaced vinyl records and became the industry standard.
In the 1990s, CD evolved into Digital Versatile Disc to replace videotapes. CDs can only contain 15 minutes of a 450,000 pixel visual image.
Electronics companies established a DVD forum to create a new standard. A single DVD disc can store 4.7 gigabytes of data, enough to contain a feature-length movie with standard definition.
In the 2000s, high-definition broadcasting began, but DVD capacity was much too small to store high-definition material. The DVD forum began discussion of the next-generation DVDs in 2002.
Problems began when Sony left the forum and created its own format called Blu-ray. Samsung, Panasonic and Apple Corporation joined the Blu-ray side, while Toshiba was allied with companies like Microsoft to support HD DVD.
The two formats can store 20 gigabytes of data, enough for a high-definition feature- length movie.
HD DVD is similar to the current DVDs and is cheaper to produce, but Blu-ray has a bigger capacity and better copy-protection.
In the end, content mattered. The two sides fought for three years but film studios made the difference.
Disney, 20th Century Fox and Columbia Tristar supported Blu-ray. Paramount and Universal supported HD DVD.
Blu-ray had 50 percent of market share while HD DVD had 25 percent. Then, Warner Brothers, which makes up 20 percent of the market, turned to Blu-ray and the HD DVD side collapsed.
HD DVD tried to appeal to consumers with movies like “Transformers,” but Warner’s “Harry Porter” series and New Line Cinema’s “The Lord of the Rings” were only available on Blu-ray.