Why was aid blocked after the cyclone in Myanmar?

Why was aid blocked after the cyclone in Myanmar? 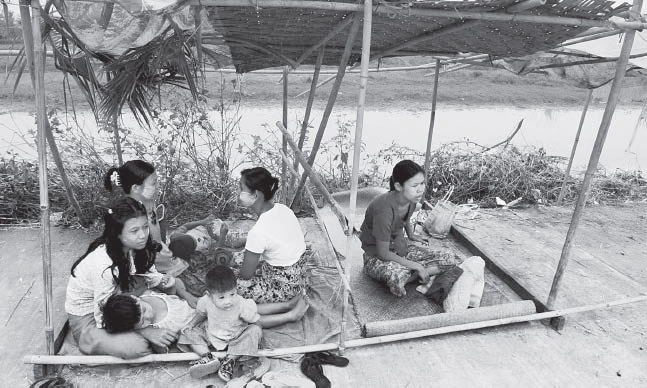 A Burmese family that survived the cyclone stay in a temporary shelter in the outskirts of Yangon. [AP]

It has been hard to just sit back and watch a growing number of massive natural disasters kill thousands of people around Asia throughout the past couple of years.

Last month, a massive earthquake hit Sichuan Province, western China, and it is believed to have killed nearly 70,000 people and injured as many as 400,000. More than 20,000 are still missing.

In both cases, aid from abroad played a big role in the rescue and reconstruction work. 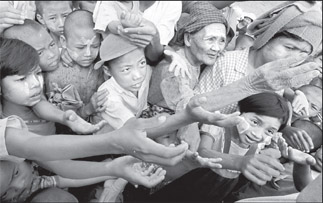 Cyclone survivors reach for food aid in the outskirts of Yangon on May 12. [AFP]

But in Myanmar, which has experienced one of the worst natural disasters in years, help from the outside world has been turned away, leaving the people to face the crisis by themselves, while much needed aid is held up.

On May 3, Cyclone Nargis raged through the country, killing at least 77,000 and leaving nearly 60,000 missing.

Myanmar, which has been ruled by a military junta for most of the last four decades, is tightly closed off.

For weeks after the cyclone, the regime refused help from the international community.

The death toll is likely to increase since victims have been left with no emergency supplies, few shelters and few if any workers to deliver much-needed medical service to prevent infectious diseases for nearly three weeks.

Why did the junta in Myanmar close its borders in the wake of such a massive tragedy as its people suffered?

In order to answer this question, we need to look at the country’s political history dating back several decades.

Myanmar is a multi-ethnic country consisting of 135 ethnic groups, each with its own language and dialects.

They can be broadly classified into eight major groups: the Kachin, Kayah, Kayin, Chin, Mon, Bamar, Rakhine and the Shan.

In the late 19th century, the country came under British colonial rule, administered through India.

In 1886, after the Third Anglo-Burmese War between the British military and Myanmar’s Mandalay Kingdom, all of the country’s territories fell to British control.

The country eventually gained independence from British control in 1948, declaring itself as an independent republic, the Union of Burma.

Sao Shwe Thaik, a revered political leader from the Shan ethnic group, was elected as Myanmar’s first president, and the country seemed to be on a smooth path to stable democracy. But the fledgling democratic nation didn’t last long.

In 1962, Gen. Ne Win staged a coup, changing the country’s name from Burma to Myanmar, a socialist country completely controlled by the general and his followers. They controlled politics and all other spheres of society, including business and media.

In 1988, Gen. Ne Win stepped down from his post after more than 25 years, amid a flurry of student demonstrations and protests against his regime, known as the “8888 Uprising.”

While thousands of people were killed during the months-long protests, another military general named Saw Maung and his followers staged another coup, declaring martial law and promising free elections for the first time in almost three decades.

The military regime kept its word and held elections in May 1990, but refused to step down after Aung San Suu Kyi, a prominent pro-democracy activist, and her party won, taking 392 out of 489 legislative seats.

Since then, the military regime, led by Gen. Than Shwe, has held power under a new constitution that reserves a large part of the seats in the country’s parliament for military members and bans those married to foreigners from running for political office.

Many critics have said the constitution is aimed to ban Suu Kyi, who had married a British diplomat, from seeking a seat. She is now a widow.

Demonstrators have sporadically held pro-democracy protests over the years, only to be suppressed by the military.

In 2007, public frustration that had been mounting for years led to another mass demonstration. Thousands of monks, students and civilians took to the streets from September to October, demanding that the military regime step down.

The government in Myanmar has been criticized for downplaying the official death toll. The United Nations Human Rights Council claimed at least 31 people were killed by the security forces and as many as 4,000 arrested.

Against this historical and political backdrop of rising public calls for democracy, the military-controlled government in Myanmar has been extremely reluctant to open up its borders to foreign aid workers, fearing their potential influence on Myanmar’s society.

The United States, Britain and other major international powers, along with the United Nations, have been working hard to press the military regime to open its doors to donors and aid workers.

On May 23, the efforts started to have an effect, and UN Secretary General Ban Ki-moon visited the country, successfully convincing the government in Myanmar to accept international aid.

But the road to reach the victims in Myanmar will not be smooth.

Though 51 nations have so far pledged to provide the country with more than $100 million in aid to help the recovery from the cyclone, their hopes seem to be at odds with the dictatorship in Myanmar.

“The government in Myanmar said the country is no longer in need of emergency aid but more in need of heavy machinery and other equipment for reconstruction work for damaged buildings and houses,” said a Foreign Ministry official in Seoul who recently visited the country to discuss aid policies with other donor countries. “But Western countries insist there are still many people who haven’t received decent emergency care, so there have been a few disputes over the issue.”

Among the donor countries, only Japan and the member nations of the Association of Southeast Asian Nations agreed to provide support for both emergency aid and reconstruction work, while other countries remained firm in their policy that providing emergency shelter, medical services, food, clean water and other supplies should be the utmost priority.

Seoul has so far sent two rounds of aid shipments worth $2.1 million since the beginning of May, and plans to send additional aid worth $400,000 along with some 30 medical workers.

Many international aid agencies have claimed the already high death toll may rise further as more children and elderly may die from dysentery and other waterborne diseases in areas where people have no choice but to drink dirty water, on top of the lack of food and shelter.

According to the UN, as many as 2.5 million people are still homeless and face hunger and potential outbreaks of disease. Other organizations have found cases of pneumonia, malaria, cholera and diarrhea.

In 2000, the World Health Organization ranked Myanmar’s health system as the world’s second-worst, next to Sierra Leone in Africa.