A fashion mecca thrives in Seoul

A fashion mecca thrives in Seoul 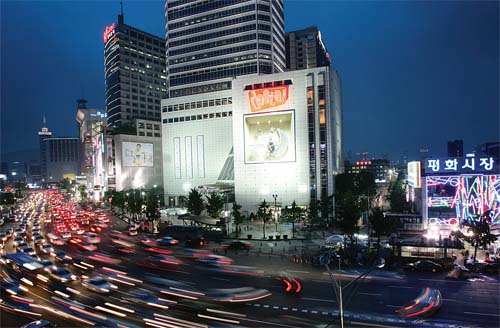 In this new series, we will provide an overview of famous Seoul streets where different industries and shops cluster together. We begin with Dongdaemun, the center of Korea’s apparel industry.

Michael Findley, an American systems engineer based in Korea, shops at the Yongsan electronics market more frequently than at any other marketplace in Seoul.

But when his shopping turns to everyday needs, such as when he needs clothes, he heads to Dongdaemun.

“There are 30,000 stores in 10 square blocks. That’s amazing,” Findley said while shopping in Dongdaemun recently. “Any and every clothing item you want to buy is here. I have been to a lot of other countries, but none is quite like this.”

Dongdaemun, the popular name for the city’s East Gate built during the Joseon Dynasty, now refers to an area in central Seoul that was built near the old gate’s site. Shops for clothes, shoes and related items line the streets as far as the eye can see.

With 30 shopping malls and countless shops clustered together, Dongdaemun is the largest shopping district for clothes in Korea.

According to data from the Seoul city government, Dongdaemun accounts for as much as one-fifth of the nation’s apparel trade, or approximately 18.2 trillion won ($17.8 billion) worth of clothes every year.

It is because of an industry of such a huge scale that Seoul dreams of joining Paris and Milan as a global fashion industry center.

Findley sees it as a realistic dream.

“Dongdaemun is for clothes,” the 44-year-old Texan said.

Dongdaemun’s clothes shops are dispersed over 586,000-square-meters, an area roughly equivalent to 100 football fields, but the market did not reach that size overnight.

According to the association of Dongdaemun merchants, the Council for Special Tourism District in Dongdaemun Fashion Town, the first clothes market was formed in the district in 1953.

Merchants, mostly North Koreans who evacuated to the South during the 1950-53 Korean War, congregated close to where Dongdaemun Stadium is now being torn down and began to sew and sell clothes they made or converted from U.S. military uniforms.

“It was named Pyounghwa, reflecting the hope that Korea would never see another war on its soil,” said Song Byong-rol, secretary general of the council. Pyounghwa, also spelled pyunghwa or pyeonghwa, means peace in Korean.

The Pyounghwa Market was moved indoors in 1962 and its success drew other clothing merchants to the district.

These merchants established several nearby markets with copycat names. Half a dozen markets in the area still carry some variation of pyounghwa in their names.

Some of the clothes at those markets went to general customers, but the focus was wholesale trade.

Being close to the places where clothes were produced, the markets provided low-cost clothing to retailers all over Seoul and the rest of the country.

“It is pretty much the same today,” Song said. “Retailers from outlying regions come together in rented buses overnight to buy clothes they will sell the next day.”

That’s why, Song said, the wholesale shops open for business at 9 p.m. and close at 4 or 5 a.m. the next day.
It was not until the late 1990s, however, that the clothing cluster in Dongdaemun began the heyday it enjoys now.
Several modern shopping centers, such as Migliore, Doota and Hello apM, have moved to the area since 1998, located mostly across the street from Dongdaemun Stadium.
Equipped with many shops, entertainment facilities and eateries, the new markets attract more general shoppers. For instance, Migliore, Dongdaemun’s biggest shopping center, houses 2,400 shops. Daily visitors to the area were as high as 2 million in 2006, and the daily trade in clothes was worth 50 billion won, Song said.
The market’s expansion is still underway with new shopping centers being added apace. Cerestar, a five-story shopping mall, opened on May 28 in the area, with around 500 shops. Three other big shopping malls — Goodmorning City, Fashion TV and Ramodo — are expected to open this month.
Drawn by cheap and accessible clothing shops, many foreign shoppers also shop at Dongdaemun. Song said approximately 2.5 million foreign tourists and retailers visit Dongdaemun every year.
In step with its growing international appeal, the city of Seoul has been running the Dongdaemun Market Information Center since 2005. The center helps foreign retailers shop at Dongdaemun by providing tips about where they can buy clothes and other items. Interpretation services are also provided.
According to Ko Dong-chul, the head of the center, 1,900 foreign shoppers used their services in 2007, and bought items worth 1.43 billion won.
“The majority of these foreign buyers come from neighboring countries — Japan and China mainly — but many others are flying in a long way from Australia, Europe and the Americas,” Ko said.
Given Dongdaemun’s potential, Seoul wants to become the No. 5 shopping center in the world after Paris, Milan, London and New York. The Seoul Fashion Center, which the city founded in 2000 to that end, spends more than 10 billion won each year fostering and supporting designers, as well as helping clothes sellers export their wares. The city also designated Dongdaemun as a special tourist zone in 2002.
“Dongdaemun has a well-made fashion cluster that is hardly seen in any other country,” said Choi Jong-sik, who is on the Seoul Fashion Center’s foreign marketing and promotion team. “If Korea can make the best of it, I think it can become the No. 5 fashion powerhouse.”
Yoon Heon-deok, a business professor at Soongsil University, conducted a study of Dongdaemun’s potential to become a fashion center. He said the goal is attainable, but the clothing factories once located around Dongdaemun are quickly dwindling.
“The market has a good distribution infrastructure and procurement infrastructure, but a poor production infrastructure,” he said.
To bolster its manufacturing side, Yoon said the city needs to build an apartment-type factory that could hold many clothing manufacturers.

Analysts think it could be a good week for Kospi