From guitar picks to pianos, Nakwon sells it all

From guitar picks to pianos, Nakwon sells it all 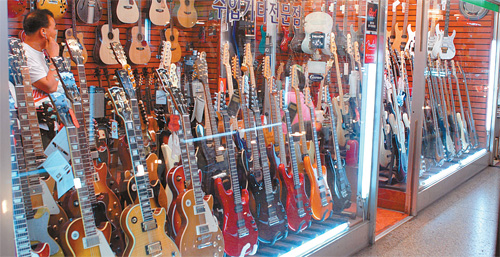 A guitar retail shop at Nakwon Instrument Complex displays a variety of guitars in its show window. The shop stocks everything from low-end models for less than 200,000 won to high-end guitars that cost 9 million won. By Sung So-young

In this series we look at famous Seoul streets where different industries and shops cluster. Today, we visit Nakwon Instrument Complex, the center of Korea’s biggest musical instrument market.

Sounds of pianos, guitars and trumpets wafted through the second floor of the large, nondescript building near Insa-dong in downtown Seoul last week, the same day the rainy season officially arrived. Though one would never guess it from the outside, the building houses the largest musical instrument marketplace in Korea. Inside, dim lighting reveals a sizeable crowd for a weekday navigating through rows of shops.

“I came here to have my guitar fixed,” said George Hill, a 12-year-old British boy, who was accompanied by his mother and brother.

Hill came to the Nakwon Instrument Complex, located in Nakwon-dong, Jongno, central Seoul from his home in Seongbuk-dong, northern Seoul, because there is no repair shop near his home.

His brother Richard Hill, 14, said it was his second visit.

“My friends told me about this place. It’s a good area to spend time,” he said.

A Russian missionary wearing a white dress shirt and black pants walked by carrying a guitar on his shoulder.

“You have many options here, so you can find exactly what you want,” he added.

Two Korean men in their 30s hurried into a guitar shop called Segovia. They wanted to know the price of a Taylor guitar called the 810E, which was 3.2 million won.

In an era of Internet shopping malls, a few clicks take people anywhere, so what made these two men take the trouble to leave their homes to shop on a rainy day?

“You have to listen to a guitar’s sound if you want to buy a good one. Even though online Web sites offer sound samples of all their instruments, it’s very hard to judge the instruments’ quality from the samples,” the man said. 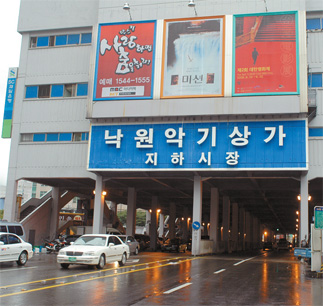 Nakwon Instrument Complex is right next to Insa-dong, one of Seoul’s most popular tourist destinations. By Sung So-young

Nakwon Instrument Complex, which houses more than 500 shops, has become a music mecca in the 40 years since it opened its doors.

“This place was a hangout for hungry amateur musicians. There were no recording labels back then,” recalled Jung Gyu-bong, who has run an accordion shop at the complex since the early 1970s.

“Instead, instrument shop owners used to organize bands because they knew who the best guitarists and drummers were among their regulars. That’s why amateur musicians came here early in the morning and goofed around for hours in the instrument shops; they were hoping to be chosen as band members.”

With time, however, the Nakwon complex has gone from being a hangout for musicians to an attraction for a diverse range of customers who love music.

“I can see big changes in our customers. Until the late ’80s, music meant guitars and guitars meant music. But the instrument market has become more varied as music education has diversified. In addition, music also shook off its negative image as something frivolous with time,” said Lee Dong-jin, the president of Segovia.

“People from all walks of life are our customers, from pre-schoolers learning to play the ocarina [a wind-blown ceramic instrument from Italy] to gray-haired men in their 70s who play the saxophone,” Lee added. In order to appeal to customers with diverse needs, the Nakwon complex now offers most of the world’s musical instruments, from ethnic instruments to percussion for kids.

As a wide range of instruments are sold, sales keep increasing, Lee said. An association of Nakwon shopowners said it has no cumulative sales data for all the complex’s instrument shops.

Lee began working at the Nakwon complex in 1972 at now-defunct guitar retailer Segovia. The company held more than 70 percent of the market in those days.

When enthusiasm for guitars began to give way to color TV and other leisure activities such as pro-baseball, the company went bankrupt. Lee acquired the copyright on the legendary name and used it for his shop.

Lee’s experiences provide a behind-the-scenes look at why instrument vendors gathered in Nakwon-dong.

“After the Korean War, refugees settled in the streets of Nakwon-dong and sold agricultural products. The street market became big, and the area was way too crowded. That’s why in the early 1960s Kim Hyun-wook, then mayor of Seoul, built a building here and urged street vendors to move into it [in an effort to get them off the street],” Lee said. 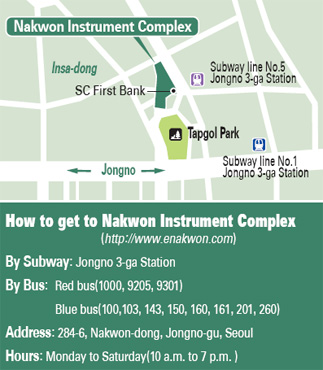 But it took some time before Nakwon shifted from selling agricultural products to musical instruments. In Chungmuro, near Nakwon-dong, people connected to the film industry sold musical instruments and record players on the street. Mayor Kim persuaded them to move to the building as well, and it later became Nakwon Instrument Complex, Lee said.

“Musical instruments are different from everyday commodities. People need rice everyday but they don’t need to buy a piano everyday. So if you have an instrument shop in a residential area, you have no competitiveness. That’s why musical instrument retailers started gathering here from all parts of Seoul,” added Lee.

Since then, the Nakwon complex has thrived in sales and size. The Internet also played a key role in the complex’s growth.

Thanks to an increasing number of Internet-based music gatherings, the Nakwon complex capitalized on the Internet boom, said Yoon Young-gook, a manager at the Segovia.

“Half of church gatherings are all about singing. You need drums, basses, amplifiers and so on,” said Lim Chang-soon from Sooami Instrument. “Because I went to selling church-related musical instruments, sales have gone up 100 percent compared to when I sold classical guitars.” Lim said between 30 and 40 percent of the retailers specialize in church music.

Despite the healthy sales, those who own stores at the complex are worried about the future.

“Seoul Mayor Oh Se-hoon wants to relocate this complex because he thinks this building is an eyesore. The relocation of this complex was one of Oh’s campaign pledges,” Lee said.

The Nakwon complex is located right next to Insa-dong, a foreign tourist magnet specializing in antiques and crafts.

“But this complex was not made overnight. This is a very important part of Korea’s musical history. I think the city could make this place something special.

“There are so many shops that sell Korean traditional musical instruments near Insa-dong. If the city persuades them to settle in this complex and make a hall where traditional shows could be staged, it could become one of the leading tourist attractions along with Insa-dong.”

In fact, many foreigners visit the complex even though it is not heavily promoted in guide books compared to other attractions such as the Dongdaemun shopping district.

“This complex is well-known among U.S. Army personnel because it is one of the biggest instrument markets in the world,” said Lee Chang-ho, who works at an amplifier shop.