Why did the truck drivers go on strike?

Why did the truck drivers go on strike? 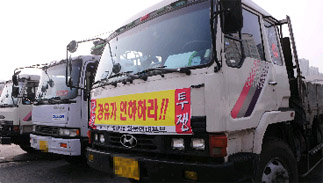 The global economy is in some turmoil at present. Prices of raw materials, commodities and energy are soaring like never before, and the price of fuel is on the rise globally. The union truckers demanded tax cuts on fuel, more subsidies and a hike in shipping charges. They complained that the more they drove, the more they lost. They demanded that the government enter negotiations with companies for a suitable fee for their services, all while refusing to drive.

The business world can be divided into two major groups ? labor and management. Individual laborers, by themselves, have no power to request a raise in their salaries. However, when laborers combine to form a union, they can then start negotiating with management on a range of issues, not the least of which is higher wages. During these negotiations, if the laborers feel their needs are not being met, they as a group can refuse to work altogether, resulting in a strike.

In the case of the unionized truckers, technically they are not “laborers” in the narrowest sense because they were not hired by a particular company. Instead, the truckers are closer to individual entrepreneurs who transport freight. Because of this, some experts avoided the term “strike” and instead referred to their collective action as “group transport refusal.”

Compared to other countries, Korea’s labor-management disputes are relatively frequent. According to 2006 data from the Ministry of Labor and the Korea Institute for Industrial Economics and Trade, strikes cause d Korean companies to suffer annual losses amounting to 1.2 million working days. This figure represents the number of strike days multiplied by the number of participants in the strikes.

Korea went through two large-scale strikes in 2003 by truck drivers. The first strike lasted 14 days while the second strike lasted 16 days. Total losses for these strikes were estimated at around 1.2 trillion won ($1.2 billion). This makes the daily loss estimate around 40 billion won. For the recent strike, KITA estimated earlier that the daily loss would reach 128 billion won.

However, the trucker unions did gain from these strikes as well. In 2003, the drivers received government subsidies to compensate for the rise in fuel costs and highway toll fees were lowered.

This time around the unionized truckers demanded at least a 30 percent raise in transport fees. As direct negotiation with companies is difficult, they urged the government to negotiate with large companies like Samsung, Hyundai, LG and Posco. Subsequently the Korea Cargo Workers’ Union, which represents unionized independent truckers, and the Container Transportation and Container Yards Association, which represents 14 major shipping companies, agreed to a 19 percent raise in shipping charges on June 19.

According to Korea’s labor laws, the nation’s laborers have a right to form a group and negotiate working conditions, including salaries and working hours as a group with the management. They also have the right to take action as a group when they feel that their rights are not being met. Strikes, according to the law, are therefore legal.

Although there are a variety of reasons why labor unions decide to go on strike, the most frequently cited is a demand for higher salaries. Laborers often justify their wage demands with price rises in commodities.

This year in particular, the price of commodities, raw materials and energy sources saw a marked leap. In May, consumer prices jumped 4.9 percent compared to the same time last year. So if prices rose 4.9 percent, someone who has received a salary of 1 million won a month would need 1,049,000 won for the same worth.

Management on the other hand often refuses these raises, saying that business is suffering.

If both sides fail to bend, strikes occur.

Labor-management experts say that this year, they expect more strikes than in previous recent years because the price rises in oil and raw materials is on a larger scale. The Korea Importers Association calculated that raw material prices this year jumped fourfold compared to 1995.

Oil prices are even worse. Korea’s benchmark Dubai crude oil surpassed $100 per barrel this April. In recent weeks, it has surpassed $130 and continues to rise.

The truckers’ union says that it is losing more by working harder because fuel is so expensive.

However, they are not the only ones suffering. In fact, management is having a hard time making ends meet because it also needs to cut back on spending. This is because soaring raw materials and oil prices are reducing their profit as well.

During the week-long strike, many sectors across the nation suffered losses as a result of the truckers’ action. From just one group of laborers refusing to work, the whole nation felt the impact one way or another.

For example, early last week, unionized construction workers began a strike, complaining of the price of diesel going up as well as a stoppage of steel and other materials coming into construction sites as truck drivers were refusing to transport them.

During the same week, Korean ports saw losses as well. Ports were suddenly turned into storage spaces with piles of containers waiting to be shipped. At Busan Port, Korea’s largest, the amount of freight that was loaded onto ships was around 24 percent of the port’s normal daily operation. The Ministry of Land, Transport and Maritime Affairs said that only 20 percent of the average volume of cargo that is usually shipped to Korean ports was being handled.

Last Friday, a vast majority of truckers agreed to a 19 percent raise in shipping charges and went back on the road. Though experts say the negotiations between labor and management had some success, it is not enough to stop further strikes in the foreseeable future.