What’s so significant about the Olympics?

What’s so significant about the Olympics?

Chinese children hold Olympic rings and a heart-shaped sign celebrating the 2008 Beijing Olympic Games at a kindergarten in Zaozhuang, Shandong Province, in June. The sign reads: “Cheer up for the Olympics, Cheer up for China”. [REUTERS]

The 2008 Beijing Summer Olympic Games will begin at 8:08:08 p.m. on Aug. 8 at the Beijing National Stadium, named Guojia Tiyouchang Main Stadium, in Beijing. It will run until Aug. 24.

Over one billion Chinese have been eagerly looking forward to seeing the first Olympics in their country since Beijing was selected as the host city on July 13, 2001, by the International Olympic Committee. Beijing beat the other candidate cities of Toronto, Paris, Istanbul and Osaka. Previously, Beijing lost to Sydney in the final selection round in 1993 to host the 2000 Summer Olympics.

In the 2008 Olympics, a total of 15,000 athletes from 205 nations will participate in the world’s primary global sports event. Over 17 days, they will be competing for a total of 302 gold medals.

The run-up to the Games has not been smooth; it was marked by numerous disheartening incidents, including protests against China’s abuse of human rights in Tibet, high-profile disruptions of Olympic torch protests around the world, including South Korea, and the tragic, massive 8.0-magnitude earthquake that devastated Sichuan province in May. 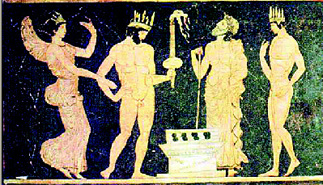 In several counties boycott campaigns have been launched against the host country, claiming it contradicts the Olympic goal of promoting a peaceful and better world.

IOC members, athletes, sports lovers and human rights activists have expressed their concern about violations of fundamental freedoms in China.

In addition, excessive politicization of the Olympics may damage the Olympic credo of Peace, Friendship, Fair Play, Glory and Honor.

Origin of the Olympics

The ancient Olympic Games were a series of athletic competitions held between various city-states of Ancient Greece. They began in 776 BC in Olympia, Greece, on the west edge of its Peloponnesian Peninsula. They were held until 393 AD. The name of the ancient Olympics came from the city’s name, Olympia. In addition, the ancient event was held in honor of the king of the gods in Greek mythology, Zeus.

Pierre de Fredy, Baron de Coubertin (1863-1937), known as the founder of the modern Olympics, thought the Olympics could be revived and established the International Olympic Committee in 1894. Two years later, in 1896, the first modern Olympic Games, officially known as the Games of the I Olympiad, were celebrated in Athens, Greece. The Games were held from April 6 to April 15.

Spurred by the motto “Faster, Higher, Stronger,” a total of 245 athletes from 14 countries took part in the Olympics. Since the first event, the IOC has hosted the Olympics every four years.

Politics in the Olympics

The 1936 Berlin Olympic Games were the most politically charged games in Olympic history. The flags of Hakenkreutz, known as the Nazi symbol, fluttered in the wind in each stadium of these Olympics.

In the 1972 Munich Olympics, politics ran counter to the spirit of the Games. A Palestinian terror group called Black September, with ties to Yasser Arafat’s Fatah organization, killed 11 Israeli athletes and coaches and one German police officer. The joyful mood of the Olympics was shattered by the killings, which came to be known as the Munich Massacre.

Eight years later, in the 1980 Moscow Olympics, an American-led boycott was a part of a protest against the December 1979 Soviet invasion of Afghanistan.

Other countries Japan, China, Canada and West Germany also joined the boycott. Some of these countries competed in their own “Olympic Boycott Games,” held in Philadelphia in the United States.

Politics intervened again at the 1984 Los Angeles Olympic Games, where a Soviet-led boycott followed the previous U.S.-led boycott in Moscow.

They were protesting the U.S. Invasion of Grenada in 1983. The invasion of the island nation by the U.S. and other countries was a response to the ousting and execution of the Grenadan Prime Minister.

With these precedents in mind, people have expressed concerns about the upcoming 2008 Beijing Olympic Games.

Some say it is possible that the Beijing Olympics will become highly politicized.

“The massive earthquake in Sichuan Province slightly weakened the nationalism of the Chinese people,” said Oh Seung-yul, a professor of Chinese Studies at Hankuk University of Foreign Studies.

“By hosting the largest sports event in the world, there is a possibility that the Chinese people will become obsessed with ultra-nationalism.”

Economics in the Olympics

The Olympic Games can bring great economic benefits, such as increases in production and tourist revenue to the host country, said Jeong Cheol-ho, head researcher of the Posco Research Institute. “China, the world’s fourth-largest economy, will not experience a valley effect, the down-trend of business.”

China’s Bureau of Statistics anticipates that China will reap $30 billion in economic benefits, while creating about 300,000 new jobs through the Olympics.

South Korea received an economic boost of $4 billion from hosting the 1988 Olympics in Seoul. The 1992 Barcelona Olympics brought economic benefit of $26 billion to Spain, while the United States gained $5.1 billion through the 1994 Atlanta Olympic Games. The Sydney Olympic Games in 2000 provided earnings of $6.3 billion to Australia.

With the powerful economic impact of Olympic Games, people are worried about the commercialization of the Olympics as global companies compete fiercely to profit from the international sports event.

Goal of the Beijing Olympics

Coubertin said the “Olympic Games are expected to implant one ideal in the world.”

What should the Chinese do to help the success of their first Olympics in their capital Beijing?

“Before the opening of the Olympics, China finished constructing the world’s longest trans-oceanic bridge, named the Hangzhou Bay Bridge, and built the Shoudu International Airport, which is twice the size of Korea’s Incheon International Airport. They wanted to flaunt their power,” Professor Oh said.

“However, if they insist on showing off their national strength too much, as well as their heritage and culture, people will become fed up with them.”

Oh added, “If China sticks to winning gold medals with excessive competition against the United States, they will damage the Olympic spirit.”