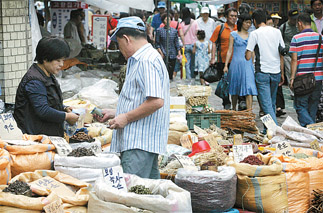 The aroma of medicinal herbs wafts across the platform at Jegidong Station on subway line No. 1.

Although “Gyeongdong Market” is a widely recognized name among Koreans, the official title designated by the Seoul Metropolitan Government in 2005 is “Seoul Yang Nyoung Si,” literally meaning the “marketplace for drugs in Seoul.” This was where an institute was located where citizens with ailments were treated for free during the Joseon Dynasty.

Since Oriental herb shops sprouted up in the 1960s, the market has grown to over 200,000 square meters (about 49 acres) in the Dongdaemun ward of central Seoul. It has served as a hub for the raw materials of Oriental medicine.

The market accommodates 1,044 officially registered shops ranging from Oriental medicine clinics to drugstores, decoction shops and mill houses. It now accounts for 70 percent of the entire volume of medicinal herbs circulated across Korea, according to the Seoul Yang Nyoung Si Association. Ginseng native to Geumsan, South Chungcheong, is shipped to Seoul Yang Nyoung Si and then sold to wholesalers and retailers in other parts of the country.

There are other Yang Nyoung Si nationwide ? in Daegu, Jecheon, Yeongcheon, Geumsan and Jeonju. Their origins mostly date back to the Joseon Dynasty or the early 1920s. Most of the stores at the markets look very much alike. Just like in old markets such as Namdaemun and Itaewon, shops are lined up on the left side of the pavement and street vendors on the right call out to passers-by: “What are you looking for Let me know what you need.” 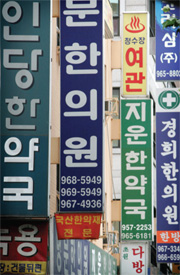 Stacks of bellflower roots (known as doraji in Korean and thought to be good for relieving fevers and coughs), milk vetch roots (hwanggi in Korean, used to boost energy), cinnamon and ginseng as well as some unidentified herbs and tree roots are piled on shelves. A vendor uses a gourd bowl to measure out rosebuds from China in a large sack to sell. Asked if they should be cleaned before being made into tea, the shopkeeper only said, “This is clean. You don’t have to do that.”

Some stores display items that could be rather odious for some who are not fond of eating dried toads and centipedes.

A close view of the signs on the stores reveals that some are shops for Oriental medicinal ingredients, hanyakbang, while others are dubbed medical clinics, or haneuiwon. Although some shops prescribe Oriental drugs, hanyak, medical treatment such as pulse examination (a traditional method of diagnosing patients) and acupuncture are an exclusive domain of haneuiwon. 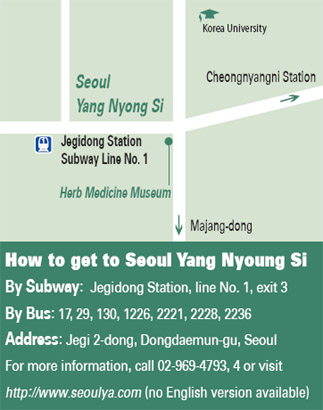 According to the association’s Kim, most of the paid doctors are elderly who are no longer energetic enough to run their own clinics but still want to treat patients and earn pocket money.

“Many of them [the doctors] are very old but some are known to be much more skillful than those seen in medical hospitals,” he said.

There are about 500 kinds of raw materials for Oriental medicine certified by the Korea Food and Drug Administration available at the
Gyeongdong Market.

But only 150 are from Korea. The rest are imports, from China, North Korea and Southeast Asian countries such as Vietnam and Indonesia. Cinnamon and licorice root, for example, do not grow in Korea’s soil and climate.

An item’s country of origin is identified on a small wooden board stuck into a pile on the market shelves.

Up to 500 Oriental herbal ingredients are available at Seoul Yang Nyoung Si. By Oh Sang-min

Jang Ja-gyung, 46, a shop owner, said that “some customers tend to believe a native Korean herb is always better. If some ingredients are from other countries, especially China, they suspect the quality or sanitary conditions.”

Kim disagrees. He said some materials from China excel Korean counterparts in quality.

“Hanyak[Oriental medicine] cannot possibly consist of 100 percent Korean ingredients,” said an Oriental medical doctor in his late 60s who refused to be identified for privacy reasons. “Let me remind you it’s a false myth that Korean herbs are the best and imports are inferior.”

The popularity of the market has gradually faded in the past few years, many shop operators admit.

This is partly because a few shops have been caught selling illegal items containing poisons.

Kim Nam-il, another Oriental medicine shop owner who inherited it from his father, said, “Now customers only peak in the midsummer period here, as they seek to buy ingredients for Korean traditional foods to heal their tired bodies.”

One of the foods is samgyetang, a chicken soup with sticky rice, ginseng, hwanggi and jujube, eaten during the hottest time of the year.

Business has gone south lately with the bad economy. The number of visitors is shrinking, he confessed. The Seoul city government’s environmental re-engineering process that began last year and is scheduled for completion in October is a ray of hope for the merchants.

Some uneven pavement is being adjusted, a new public parking lot will be built and stricter sanitary rules will be applied for medicinal and food items on display.

Asked about the prospect of the new project underway, shop operator Kim Nam-il said, “Well, we have no choice but to modernize to keep thriving.”