1st summer edition of Hi Seoul takes it to the river

1st summer edition of Hi Seoul takes it to the river 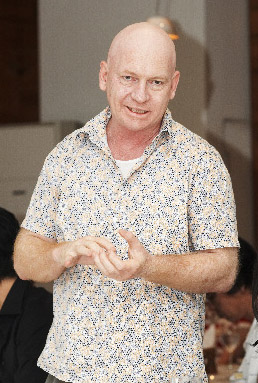 Those gritty-necked folks stuck spending summer in the city need not despair, thanks to Roger Rynd and his international team of performance artists.

The man from Down Under, who has worked in Korea off and on since 1994, is the artistic director of the Hi Seoul Summer Festival.

Starting on Saturday, the annual event is expanding to a four-season format for the first time.

“For me personally,” said Rynd, “I really like this city, and I’d like to get it more of a profile on the Internet.” His idea is that the outrageous visuals coming out of this summer’s performances will encourage people to take snapshots and stick them up on the space that Hi Seoul has created for them, “Strange Seoul,” which can be found on the festival Web site, www.hiseoulfest.org.

Taking it down to the Han River. Rynd has organized it so the events will be happening in, around and even above the water.

“There’s going to be some pretty extraordinary stuff coming in,” said Rynd. Featured performances include stunt musicians strumming their tunes from flying wires that launch them 14 meters in the air, along with a range of other acrobats.

The high-flying action continues with “The 1st Hangang Birdman Contest,” in which people can jump off a three-meter platform with their homemade flying devices and try to make it as far as they can out into the river. Those feeling a bit more confident can climb up to the eight-meter platform, and take a shot at the 100 million won ($99,000) prize for anyone who can make it to the opposite bank.

Although a lot of the artists are invited from abroad, “none of it is 100 percent foreign,” said Rynd. “It’s very important that the artists get a chance to meet and to work together.”

As much as he stresses the collaborative aspect, Rynd is more worried about getting people to come out. “The initial and the strongest premise is participation,” he said. So, in order to spread the word and get people involved, Rynd sent out groups for “guerilla performances.”

“We wanted to put the performance in the street and catch people by surprise,” he said. Street performances have included river-creature-costumed in-line skating teams and people in huge balloon costumes floating 12 meters in the sky.

What aspect is Rynd most looking forward to? “I’m excited about the whole bloody thing,” he said.

So, no need to spend your weekend walking on sidewalks hotter than a match head; the Hi Seoul Summer Festival runs from Aug. 9 to 17 on Yeouido and Seonyudo on the Han River.