Walking toward an unattainable peace

Walking toward an unattainable peace 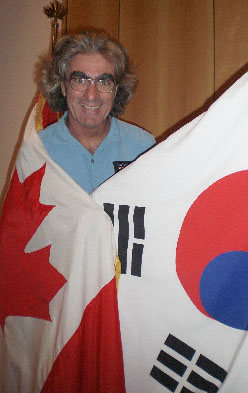 With a new war starting up between Russia and Georgia just as the Olympics kick off, it’s hard to imagine that the lofty ideals the Games are supposed to represent have any basis in reality. But some people don’t let that deter them.

Jean Beliveau is in Seoul this week; he walked here. The Canadian has spent the last eight years walking around the world, starting from his home in Montreal. He’s already traversed both North and South America, Africa, Europe and Asia. “I’m in permanent culture shock,” he said.

Once he finishes walking from the DMZ to Busan, he’s heading from Japan all the way through Oceania to New Zealand, then back up to Vancouver and across Canada back to - you guessed it - his home, Montreal.

After keeping the idea for the trip secret for eight years, “One Sunday morning,” Beliveau said, “I turned to my wife and said, ‘I’m going away for 10 years.’ She said, ‘Is this a separation?’”

I asked him, as you would, what drove him to undertake such a quixotic quest, expecting an answer that at least had one mention of all the poor children of the world.

He is doing it for the children as well, though, hoping to promote peace and nonviolence toward them. This is also (coincidentally, Beliveau said) a decade declared by Unicef to be devoted to just that cause.

Starting off with $4,000 Canadian (3.9 million won) in his pocket, Beliveau has spent much of his trip relying on the kindness of strangers. Apart from two drunks in South America who tried to steal the buggy he drags his things in, he has found it in all corners of the world. He’s been given eyeglasses in India, airplane tickets in Brazil, cash in the United States and free surgery in Algeria. Police have let him sleep in their holding cells and prostitutes have put him up in their brothels. He estimates that over 1,200 families have offered him shelter.

And he has left his mark along the way. His shoes have gone into a museum in Hungary. In Buenos Aires, Argentina, a walk for children is now held annually on Aug. 18, his birthday.

Korea is something of a milestone: it’s Beliveau’s 53rd country, and he’ll mark his 53rd birthday here as well as 53,000 kilometers walked.

His Web site is at www.wwwalk.org, and includes an impressive map of his trip so far.

So, a guy with a mission like that probably has some pretty high-minded ideas about peace on earth, right?

“We will never achieve peace,” said Beliveau, his bushy eyebrows bouncing away above his bright eyes. “We just need to try and harmonize.”

But until the right notes are struck, I guess we’ll all just have to keep on walking.