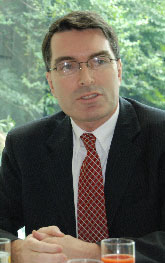 Martin Uden, the British ambassador to Korea, yesterday welcomed a change in Seoul’s stance toward a deal involving the British banking giant HSBC and Korea’s sixth-largest lender.
The Financial Services Commission, Korea’s top financial policy maker, said in a press release the same day that it will soon start reviewing a long-protracted bid by the U.S. buyout firm Lone Star Funds to sell Korea Exchange Bank to HSBC.
The FSC had postponed the review process from the end of last year until late last month, citing legal uncertainty regarding Lone Star’s status as KEB’s biggest shareholder.
“Obviously, I am very hopeful that HSBC will complete the transaction to buy Korea Exchange Bank. I welcome the fact that the FSC will start reviewing the deal,” said Uden in a press conference at his residence in Seoul.
“That hasn’t been completed yet, but it’s under way,” the ambassador said. “I am happy that it’s moving forward.”
There are two ongoing legal cases that prosecutors claim could determine whether Lone Star colluded to bend Korean law when it acquired KEB in 2003 for a cheap price. That was the reason behind the FSC delay in allowing the deal to go forward.
But many in the foreign business community here have expressed the suspicion that the delay was evidence of strong public sentiment in Korea that can turn negative toward any profit making by foreigners in the country and the Korean government’s acquiescence.
Uden said it is possible that expatriates perceive public sentiment in Korea as more negative than it really is against foreign business.
“It is understandable that people will want to know who owns what, and whether it is a good thing or a bad thing for their country,” he said.
He did say foreign businesses are more widely welcomed in the West, in particular, Britain.
“In the U.K., we are used to the idea of foreign investment. There will always be some doubts about it, but I don’t think they are generally held in the U.K.,” he said.
Uden has been serving as the top British diplomat in Seoul since February. Yesterday’s press conference was his first meeting with local reporters.