What is CSR and why is it important to companies?

What is CSR and why is it important to companies? 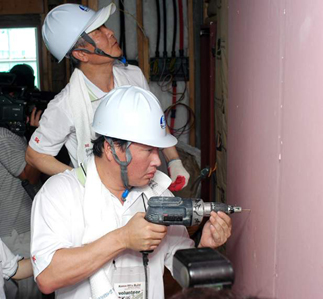 SK Chairman Chey Tae-won takes part in a volunteer program to build housing for the homeless last summer. SK, as well as many other Korean companies, are spending more resources in fulfilling their CSR duties. [JoongAng Ilbo]

In the past, companies could easily thrive as long as their products were good enough. Today, however, consumers are also judging companies by how they care for society and the environment.

This is where CSR, or corporate social responsibility, comes in.

CSR refers to the responsibility that a company takes for the impact of its business activities over society, the environment and its customers. 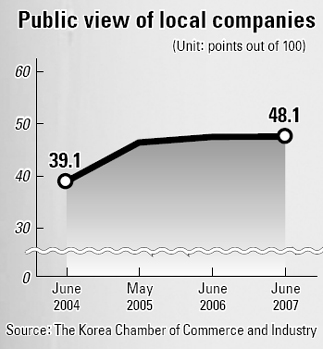 As part of the makeover, Lotte formed a special CSR team tasked with organizing volunteer and charitable activities, the company said in a press release.

Lotte used to conduct one-off volunteer programs only. With its new initiatives, the company hopes that helping the less fortunate will win the hearts of potential customers.

In April, the nation’s top lobbying group for large conglomerates announced that it will encourage members to establish CSR committees in order to improve ethical practices and transparency.

In the past, companies used to give donations or participate in charitable events, but in a rather haphazard fashion. These activities are now being carried out in more organized ways and often collectively.

Why do companies regard CSR as a priority nowadays?

Less than a decade ago, companies could turn a profit if their technologies, products or marketing strategies were good enough to appeal to customers.

But as consumers grew more aware of social and environmental issues, products and technologies were no longer enough.

What matters most in this day and age is how the company integrates in its activities its obligations to care for the environment, society and its customers.

For instance, many companies have been criticized for contributing to global warming by emitting carbon dioxide during production.

With global warming worsening, a company that is seen as eager to tackle the issue could earn the respect of customers. But a company that just sits back and does nothing is likely to be shunned by customers.

The Internet has also played a crucial role in getting companies to fulfill their social responsibilities.

Imagine a company that is found to have labeled ordinary products as organic, deceiving its customers. The scandal would spread like wildfire online, and could negatively affect the company’s stock prices and sales.

In the worst-case scenario, this could bring ruin, forcing the company to shut down its business.

Korean firms are beginning to take CSR seriously just as companies around the world are discovering that they have to as a matter of survival.

The dairy products manufacturer, established in 1950, was found to have sold polluted milk in 2000. About 15,000 people were struck with severe food poisoning.

However, the company refused to apologize.

Instead, it tried to deny responsibility and cover up the incident. Finally, its CEO had to step down and the company’s image hit rock bottom.

Many other companies are also learning the lesson the hard way.

Multinational pharmaceutical firm Merck saw a 42 percent drop in sales after news broke that it had concealed some side effects of its popular arthritis medication Vioxx in 2004.

U.S.-based General Electric, on the other hand, was able to use CSR to its advantage, regaining credibility by going green following an environmental scandal in the 1970s.

At the time, public perception of GE, an electronics manufacturer, was that it was an unethical company.

GE used to emit pollutants into New York’s Hudson River until 1977, when use of polychlorinated biphenyl was prohibited.

Things started to change as Jeffrey R. Immelt took command of GE in 2001. He decided to tackle the problem head-on, working tirelessly to build an environmentally conscious company.

Thanks to Immelt’s efforts, GE has shed its negative image.

Meanwhile, companies that are faithfully fulfilling their CSR duties are enjoying an excellent reputation.

U.S.-based financial services company American Express saw an upward spike in the number of its new customers in 1983 when it took part in a project to restore the Statue of Liberty.

According to research findings by private think tank Samsung Economic Research Institute, companies that adopt eco-friendly management policies earned more profits that those that did not. The research was conducted between 1997 and 2001.

In short, CSR is no longer a choice: It is a matter of survival for companies.

There is even a movement in the United States called Socially Responsible Investing, which allows people to invest in companies that actively practice corporate social responsibility.

Investments in such companies are estimated to total some $2.3 trillion, accounting for 12 percent of the whole U.S. mutual fund market.

In addition, U.S.-based IT giants such as Intel and Hewlett-Packard have teams which monitor whether their thousands of business partners and affiliates fulfill CSR programs.

The International Organization for Standardization has issued a set of CSR standards, which will be applied beginning next year.

This means that CSR activities could become an international measure by which to judge companies.

CSR is hard to define in a simple way because it encompasses a lot of diverse activities.

There are, however, four broad guidelines.

First, companies should contribute to their local communities and residents of the community by improving the quality of living of potential customers. This includes donations and volunteer activities.

Second, companies should adhere to the highest ethical standards.

They should not be involved in illegal or unfavorable activities, but must live up to society’s expectations.

Third, they should observe laws, including labor and environmental regulations.

Finally, they have to provide quality goods and services to customers, bring economic growth to society and create job opportunities.

President Lee Myung-bak stressed the importance of economic growth and put the onus on companies to create more jobs when he took office in February.

Korean companies have only just begun to think about fulfilling CSR.

But they must not forget that living up to their corporate responsibilities is the only way that they will become genuine global leaders.