Fall flowers in fashion at the Yangjae Market

Fall flowers in fashion at the Yangjae Market 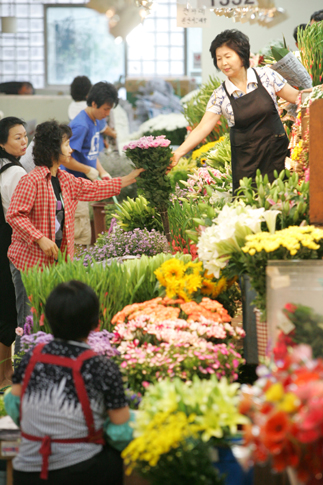 At the fresh cut flower wholesale zone of the Yangjae Flower Market Center, Korea’s biggest flower market, not only flower retailers but also consumers interested in flower arrangements or dreaming to be a florist are busy choosing flowers. By Oh Sang-min

Signaling that autumn is just around the corner, yellow, dark red and purple chrysanthemums in profusion dominate the stands of fresh cut flower retailers at the Yangjae Flower Market Center in Seocho District, southern Seoul.

“Now that fall is just ahead, chrysanthemums and sunflowers are the most popular among those who want to decorate their homes, stores and cafes,” said Gwon Hui-suk, who runs Gieok Flowershop. Her store is one of more than 90 florist’s shops in the retail zone, located on the first basement of the Yangjae Flower Market Center.

“And roses, used for bouquets and wreaths, are steady sellers,” Gwon added. Each rose now sells for 500 won (47 cents) to 700 won here, one-third to half the price than in the winter and spring seasons. 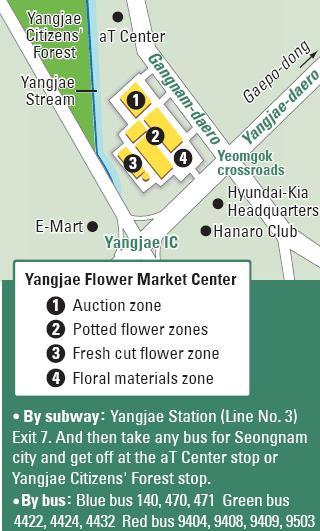 “And it’s also because demand increases in the winter and spring, when graduation, school entrance ceremonies and various other celebrations are concentrated in Korea.”

And, with roses, consumers’ color preference also changes by the season, florists here say. “As autumn is coming, flowers of deep and rich colors are more popular, whereas those of pale pastel colors are more popular in spring and summer,” said Choi Yeon-suk, who manages Yangji Florist, another shop in the market’s retail zone.

Visitors to the Yangjae Flower Market Center, Korea’s largest, can get information here about the latest fashions in flower arrangement and market trends, in addition to purchasing flowers at lower prices.

As for roses, prices in the market’s retail zone are around 30 percent lower than at flower shops in downtown Seoul.

That said, the prices in the retailzone do not compare to the prices of flowers in the wholesale zone, located at the building farthest from the main gate of the market. When visitors take one step into the first floor of the wholesale zone they can be overwhelmed by the symphony of vivid, endlessly varied colors of the flowers on offer and their fresh fragrances.

Sunflowers sell for 2,000 won a bunch, which consists of five flowers, whereas each sunflower sells for 2,000 won in the retail zone.

Visitors at the wholesale section cannot purchase flowers separately. They must purchase them by the bunch. And buyers will get flowers roughly wrapped in newsprint, without any trimming, whereas buyers in the retail zone will get trimming and basic wrapping services for free.

“This is my second time to come here and I will likely visit this market frequently from now on,” said Park Ji-hye, 21, a university student. She was carrying several bunches of flowers including roses and pastel-toned lisianthus when she came out of the wholesale zone. She bought the flowers to make a bridal bouquet for a test. She is studying to be a florist.

“The flowers here are cheap and very fresh. But I regret somewhat that the variety of flowers is not as diverse as I had expected.”

Another consumer, a housewife in her 40s, who declined to be identified, said she is generally satisfied by the quality and prices of flowers but it is an inconvenience to her that there are no price tags on the flowers in the wholesale zone. “I am a shy person and I am not good at bargaining. It’s a problem,” she said.

The Yangjae Flower Market Center, set up in 1991 and operated by the state-run Korea Agro-Fisheries Trade Corp., deals only in domestic flowers. Flowers shipped from the floriculture farms to the market’s auctions exceeded 73.4 billion won [$69 million] last year. More than 15,000 farms supply flowers to this market and more than 200 million won worth of flowers are sold through auctions to retailers and consumers each day. Visitors can watch the daily auction of fresh cut flowers at 1:00 a.m. and potted flowers at 8:00 a.m. at the auction zone near the main gate of the market.

People also enjoy visiting the two potted flower zones inside two big greenhouses. At a total of 120 stores in the two zones, consumers can purchase various potted plants ranging from small colorful cacti worth 1,000 won and anthuriums worth 12,000 won to 15,000 won, which are popular among office workers because they can grow without sunlight. There are also lotus plants worth more than 100,000 won and even more expensive plants.

“This year’s market conditions are not great,” said a shop owner in the fresh cut flower wholesale zone, who refused to be identified. “Flower sales are sensitive to economic cycles. A fall in consumer spending due to high oil prices has affected flower sales. And tightened regulations on corruption of government officials and politicians also affected flower sales. They were reluctant to exchange flower arrangements as gifts for celebrations even after the general elections.”