A market where agriculture still rules the day

A market where agriculture still rules the day Customers shop for seafood in Garak Market’s fishery retail section. The market in Songpa District in southeastern Seoul is the nation’s biggest wholesale market for fish, fruit, vegetables and meat. By Jeon Min-kyu

Huge green gloves fastened to sticks soar high to the mantra-like utterances of the middle-aged man standing on the platform.

His rhythmic gibberish sounds like a code that’s impossible to crack, except to the 20 or so bidders gathered next to stacks of boxed vegetables. Their gloves, all bearing three numerals on the palm, respond to certain points in the shouting. 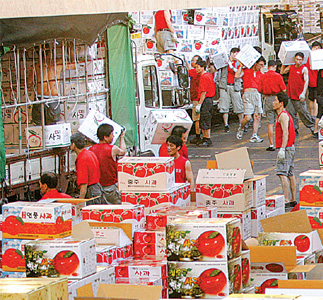 Stacks of boxes containing agricultural goods fresh from the hands of farmers, wait to be distributed to wholesalers and retailers at the market. By Oh Sang-min

“One hundred thirty!” the man on the platform yells before he falls silent for a moment. The owner of glove 130 pumps his bare fist once, intensely, proudly. Seconds later, the auctioneer begins again.

The auction, one of hundreds that occur daily at Garak Market, took place last Thursday. It is but one step in the fast-paced process of moving fruit, vegetables, fish and meat from the people who grow, catch or raise it to consumers in Seoul. 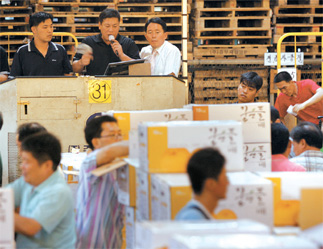 Workers move boxes of produce as an auctioneer works during a wholesale auction for agricultural goods at the Garak Market. By Oh Sang-min

Garak, Korea’s largest agro-fisheries wholesale market, is in Garak-dong, in southeastern Seoul’s Songpa District. The auctioneer was one of the 100 employed by the market.

His mantra was explained as a repetition of meaningless syllables between short price notices and the names of the items that were for sale. Jung Seong-jo, an agricultural goods wholesaler and one of the bidders, said he made several winning bids during the day. One of his buys was dozens of boxes of green onions.

“I get vegetables like green onions cheaper here than anywhere else,” Jung, 50, said. Jung is an intermediary wholesaler, which gives him and the 1,999 others who share the title the exclusive right to attend auctions at the market.

He buys from the wholesale companies that directly deal with farmers and fishers around the country. Jung then sells them to smaller wholesalers or retailers, including large discount stores.

“The reason [they are so cheap] is that no other wholesale market in the nation can beat this one in terms of the volume of wholesale items sold,” he said.

“It’s huge,” Kang said. “There is no confirmed data, but we presume that it is one of the world’s largest agro-fisheries wholesale markets, along with the famous one in Mexico.”

One of the ways the market is measured is trade volume. The 7,600 tons sold at Garak daily are worth 10.4 billion won ($9.6 million), the market says.

But trade volume is not the only measure of its size. Garak Market has dozens of buildings that sit on an entire block, an area of .54 square kilometers (.21 square miles). The market is also defined by hustle and bustle. Everyday scenes of intense fighting unfold among drivers for parking spaces and hard bargaining between retail sellers and shoppers.

Garak also has streets for retail shopping. Market data shows around 130,000 merchants, employees and customers visit the market each day. The number of trucks and cars is around 42,000 a day.

The activity becomes even more intense when national holidays such as Chuseok, Korean Thanksgiving, and Lunar New Year are around the corner. Koreans traditionally buy agro-fisheries products to make holiday sacrifices for their ancestors, as well as to eat themselves.

Shoppers for Chuseok, which falls this year on Sept. 14, weren’t yet heavy last Thursday, but merchants expect the week before the holiday to be hectic.

Still, hundreds of shoppers off the street were seen running between shops in an early hunt for Chuseok items at low prices.

Kim Jun-eok, a 62-year-old taxi driver, was helping his wife with the shopping. He took a couple of hours off to haul groceries instead of passengers. “The prices seem a little bit high ahead of Chuseok,” Kim said, loading his purchases, including balloon flowers imported from North Korea, into the car. “But they are cheap anyway. In other places, you have to pay more.”

Imported goods, though relatively small in volume, are also available in both the wholesale and retail areas at the market.

Founded in 1985 to be a main agro-fisheries wholesale channel, 90 percent of what the market sells goes to wholesalers and retail outlets.

The remaining 10 percent goes to shoppers off the street who hope to save a little money buying close to the source instead of in neighborhood groceries.

The already hectic responsibilities of auctioneers and intermediary wholesalers become even more demanding for Chuseok. Daily trade volume increases to around 13,000 tons before the holiday, Kang said.

Han Cheon-soo, an auctioneer of 16 years, said despite the intensity of his work, he likes being at the market during the national holidays.

The financial reward for bigger sales is just part of the motivation, he said. Han, 43, used to be a farmer.

“Working as an auctioneer is rewarding because I contribute to turning the sweat of farmers and fishers into something that is beneficial both for the producers and consumers,” he said. “That’s what this Garak Market is all about.”