What every bride needs: Dress St.

What every bride needs: Dress St. 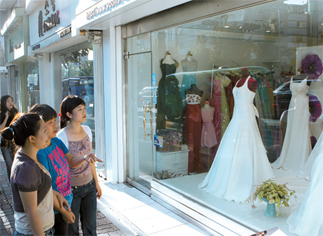 Passers-by have a look at new wedding dresses for the fall and winter seasons on the Ahyeon-dong Dress Street. By Jeon Min-kyu

A group of people sits on a couch awaiting the opening of a gold-colored curtain.

A few minutes later, the curtain parts to reveal a woman in her mid-20s, wearing an ivory-colored bridal gown embroidered with strings of beads.

On stage, as the spotlight zeros in on her, she is seen holding imitation flowers.

Her audience, members of families soon to be joined, take pictures with their cell phones while commenting on the dress.

“This one looks nice on you. This is far better than the last one,” said the mother of the bride-to-be.

“I’d love to wear a spaghetti-strapped dress but my mother doesn’t like the idea because she thinks brides should wear a classic dress that isn’t flashy,” said Kim Yun-seon, the 30-year-old bride-to-be.

In order to prepare for her “I do” moment in early November, Kim and relatives, with future in laws, are on a so-called “dress tour,” hopping between three dress shops to choose what she will wear on her big day.

She’s at one of the nation’s most dazzling and gorgeous streets, often called Ahyeon-dong Dress Street.

“Dress Street” is actually two facing sides of a stretch of road between Ahyeon-dong of Mapo District, and Bukahhyung-dong of Seodaemun District, central Seoul.

Every imaginable dress - ranging from jet-black halter-necks to avant-garde short dresses to classic white bridal gowns and even tiny dresses for flower girls - is on offer from about 50 dress shops that line Dress Street. 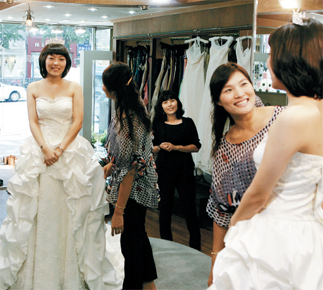 A bride-to-be tries on a bridal gown with the assistance of employees at a store in Ahyeon-dong Dress Street. By Jeon Min-kyu

“Just walking down the street, you can compare dresses and catch up with the latest trends in wedding gowns because every shop displays its best and newest dresses in its show window. Rental fees are also cheaper here than at dress shops in other parts of Seoul,” Kim said.

With the coming of fall in September, brand-new dresses for the fall and winter seasons have replaced the spring and summer ones, and the Dress Street shops are all geared up to greet customers who plan to walk down the aisle later this year. Fall is a traditional peak season for weddings owing to its pleasant weather.

“The majority of brides started going to Gangnam a couple of years ago, but brides who want to plan their wedding on a budget come here,” said Choi Jin-sun, head and designer of Jin Sun Dress.

Choi has been running a dress shop for the past 18 years.

“The starting price for renting a dress is 500,000 won ($458), going up to 1 million won depending on what type of fabric is used,” Choi said while threading beads that will be used to decorate a new dress she was working on.

“Ever since the 1997 Asian financial crisis, many small and midsized dress shops went out of business because most dress shops are one-person companies. 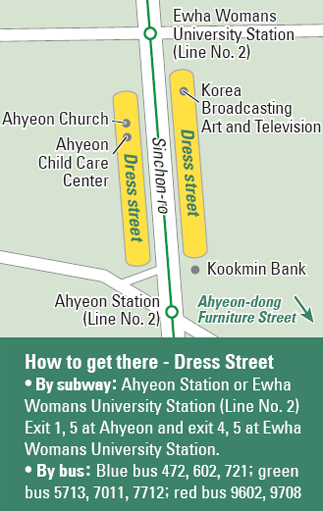 “There used to be more than 120 dress shops here, but now less than 50, including some hanbok houses, are in business,” Choi added.

To make matters worse, Dress Street was forced into a corner after the Asian financial crisis, as more dress shops were launched in the wealthy Gangnam area, regarded as a more fashionable place by young people.

Thus Dress Street saw many of its customers move to the southern part of Seoul to rent dresses.

However, Dress Street still enjoys steady demand because the older address in Seoul still has an iconic status when it comes to dresses.

Many other customers besides brides-to-be visit this place for various reasons.

“An increasing number of Japanese tourists come here to buy dresses because they say it’s much cheaper for them to customize dresses here than renting dresses in their country,” added Choi.

Many dress shops hang Japanese-language notices outside store windows describing their business hours and what types of dresses they offer.

Dress shop owners also say that Dress Street capitalizes on its favorable location. Many campuses including Ewha Womans University, Yonsei University, Sogang University and Chugye University for the Arts are clustered near Dress Street, meaning that many college students rent or order evening or cocktail dresses there.

“We need dresses for our recitals,” said a college student who did not want to give her name when asked why she and her friend were craning their necks to see displays of each dress shop while they roamed the street.

“We’re just looking to see which shop has the best dress. It’s easy to compare dresses because the shops are all located in the same place and the price range is affordable, priced between 100,000 won and 150,000 won,” said the girl who identified herself as a college senior majoring in piano.

The girl said they have to rent dresses whenever they perform at recitals. As they are seniors, they plan to customize dresses to wear at their recitals, which will be their last before graduation.

Tuxedos for men are also available on Dress Street.

Along with college students, middle-aged couples are surfacing as regular shoppers here because many want to march down the isle a second time to mark their 20th or 30th wedding anniversaries.

“Older couples are more picky about dresses than young couples,” said Kim Yoon-ok, head of a dress shop named A House for Brides.

Young mothers also rent dresses to wear on their children’s first birthday party, or dol, instead of wearing the traditional hanbok. Young women rent evening dresses when they serve as bridesmaids.

What caused these dress shops to gather in one place?

“People used to sell antiques but the very first dress shop called Sijipganennal opened here in the mid-’60s. That was the beginning of Dress Street,” said Sung Keum-ja, owner of wedding shop Eros. Sung has operated her wedding shop for the past 15 years.

“Back in the day, a wedding dress was rare, so the first dress shop became all the rage. After the huge success of Sijipganennal, dress shops were established here one after another. People who learned how to tailor Western suits started to make bridal dresses,” Sung said.

Sijipganennal, however, no longer exists.

The dress shop owners say that it is good for them to do business by clustering around in one place.

“It is easy to appeal to customers because a large number of dress shops are located in one place. If there were just one or two dress shops, nobody would come,” said Kim of A House for Brides.

In order to attract more customers and counter their formidable rival - the dress shops of Gangnam - a variety of dress-related events are held every year.

Although the two dress shop streets face each other, they are located in different city districts: Ahyeon-dong of Mapo District, and BukAhyeon-dong of Seodaemun District, which each hold their own wedding festivals.

Mapo District had its wedding festival on Aug. 25, holding a fashion show and giving a scholarship to a promising dress designer. During the event, a 30 percent discount was given for wedding packages which included a dress, make-up and pictures.

Meanwhile, Seodaemun District is scheduled to hold a festival next month from Oct. 17 to 19. During the festival, a 30 percent dress rental discount will be offered.

“More brides want to design their dresses themselves. That’s one of the changing trends,” said Sung of Eros.

“Even if you are the type of person who does not usually put on make-up, you should do so while on a dress tour. When you wear dresses, you come into the spotlight and most dresses are radiant. For this reason, if you are make-up free, you look a bit shabby. And a strapless bra is also a necessity,” said Lee.