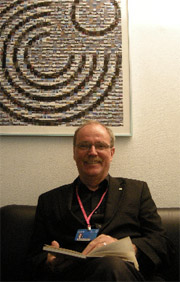 Jurgen Keil, the head of Goethe-Institut Korea, says goodbye to Korea after three and half years, and will head back to Germany. By Park Sun-young

When this reporter visited the institute in Huam-dong, Yongsan District, last Tuesday afternoon, it was bustling with preparations for a special event scheduled for the following day.

The program was set to include the first concert outside of Germany of “Goethe-Liedern,” a piece composed by Wolfgang Rihm, one of Germany’s foremost contemporary composers.

This was just one of an array of cultural events planned to commemorate the anniversary.

Another was The Andromeda Chamber Orchestra, comprising 20 young German musicians, who presented a unique concert dubbed “Jazz Meets Classic” at the institute on the evening of Sept. 6.

The founding leader of the orchestra was 24-year-old composer and tenor saxophonist Daniel Glatzel, whose mother is a Korean mezzo-soprano and incumbent professor at the Korea National University of Arts.

“I was stunned by this concert. I never expected such quality and outstanding performances.

“Glatzel is a very talented musician and I see a bright future for him as he composed almost all those wonderful pieces,” said Jurgen Keil, the head of Goethe-Institut.

“We’d like to show not only classic things, but also an avant-garde part of German culture like Andromeda Chamber Orchestra,” added Keil who will retire from his post this month and return to Germany.

Among the many achievements that the Goethe-Institut has made over the past 40 years in Korea, the most notable is likely to be its role as a “ground for free speech.”

Intellectuals would gather at the institute and discuss politics and other subjects when Korea was under a military dictatorship in the 1970s, Keil said.

“This place was a free stage for those who couldn’t express their opinions - particularly concerning ideology - outside due to the government censorship back then.”

The Goethe-Institut has successfully promoted German culture and language in Korea for the last four decades.

“We’ve had approximately 3,000 students each year for the past forty years who came to study German via our language programs.

“The large number of students studying German until 2000 was partly due to the Korean curriculum at that time [that mandated learning German as a second foreign language].

“On top of that, millions of people have attended our various cultural programs throughout the period,” Keil said.

Goethe-Institut Korea is headquartered in Seoul and has a branch in Daejeon, but not many people know that there is also the one across the border - in Pyongyang, North Korea.

“The Goethe Information Center in Pyongyang was established in 2004 allowing us to mediate between the two Koreas via cultural exchanges, just as we’ve done between Germany and Korea.

“A good example of shared culture is Yun I-sang, a Korean-German composer, who is known in North and South Korea. There are two museums dedicated to him in Korea - one in Tongyeong, South Korea and the other in Pyongyang. And you know, there is the Isang Yun Orchestra, the only Western-style orchestra in North Korea,” said Keil.

“I’ll travel to North Korea next week to attend the 11th Pyongyang International Film Festival where four German films, including ‘Yella’, will be shown. The movie is about the failed aspects of Germany’s unification.

“The forthcoming visit will also serve as an opportunity for me to say goodbye to people there and to introduce my successor,” he added.

Keil has headed German cultural centers in Sydney, Tel Aviv, Boston and Hong Kong. He came to Korea in May 2005 to take over running the Goethe-Institut Seoul.

“I have spent three and a half years here in Korea, which is the shortest period I’ve ever stayed in a country, and because of that, I’ll miss Korea the most.

“I enjoyed working with the Korean staff who are very well-trained and, for the most part, fluent in German. They have strong bonds with Germany and Goethe-Institut.

“In fact, the most interesting and wonderful thing about Korea was the people’s friendliness and openness to Germany. You feel closer to German culture in Korea,” Keil said.

Among the major events for the anniversary was a run of 40 German films - to mark the 40th anniversary - from late July to early September.

Ten films were shown at the institute’s auditorium every Tuesday and Thursday until Sept. 2 earlier in the summer.

The other 30 were screened as part of the 2nd Chungmuro International Film Festival in Seoul, which closed on Sept. 11.