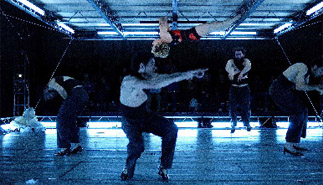 How does a city become “international”?

There’s no easy answer. But getting people from overseas mixing with locals at cultural events is possibly a step in the right direction.

As it bids to join the ranks of international cities like New York, London and Paris, the city of Seoul is hoping to promote this kind of multicultural exchange at the annual Seoul Performing Arts Festival, organizers say.

“Seoul’s mayor [Oh Se-hoon] has announced that he wishes to make Seoul a more multicultural city,” said Lucinda Walker, a British consultant working for the festival, in a written interview yesterday.

“An important step to doing this is by involving the expats in the cultural life of the city,” she said.

The festival is sponsored by the Ministry of Culture, Sports and Tourism and Seoul city government, among others, and it will start its eighth one-month program tomorrow.

“This year SPAF has decided to develop its audience base by involving the ever-growing expat community and reaching out to tourists,” Walker added. “As one of the foremost festivals in Korea, we wanted to be a trailblazer in helping to develop Seoul as a multicultural city.”

The festival runs from Sept. 18 through Oct. 19 and features 38 international and Korean works by 39 theatre companies from 13 countries, according to the organizing committee.

The organizers have also tried to make it easier for expats to book for the festival this year, they said. “SPAF has a very comprehensive English-language Web site, and a very straightforward system for [non-Korean speakers] to book tickets,” Walker said.

Shows to watch out for are dance productions by Britain’s Michael Clark Company and Spain’s Sol Pico Cia de Danza plus “Sleeping Beauty” by a theater group from Yale University. There will also be auxiliary events such as conversations with artists and workshops.

“The quality of the shows we present at the festival is of the same level that you would see at the best art centers in NewYork, Paris or London,” said Walker. “By involving the expat community we can show that Seoul is not a cultural backwater.”