Another big drop for Kospi as selling goes on

Another big drop for Kospi as selling goes on 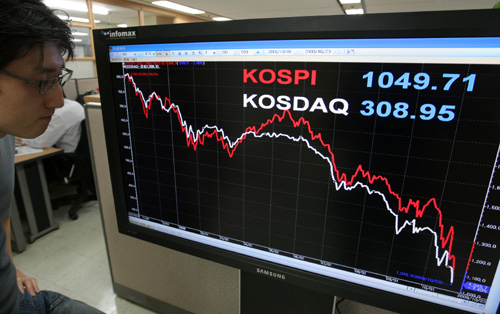 
Korean stocks plunged 7.48 percent to an over three-year low yesterday as investor jitters grew over the prospects of a global economic recession following overnight tumbles in U.S. markets, analysts said.

“The Kospi plunged, led by panic selling. Investor sentiment was severely damaged during the session as worries over a global economic recession lingered and the key stock index fell close to the psychologically important 1,000-point level,” said Lee Kyoung-su, an analyst at Taurus Investment and Securities Co.

Most shares were dented on a massive selling spree of institutional investors and foreigners. Market leader Samsung Electronics fell 6.99 percent to 472,500 won ($335). The company may today report its biggest profit decline in more than three years, according to a Bloomberg analyst survey, after a glut drove down prices of semiconductors and liquid-crystal displays.

Shares of builders and financial institutions lost ground due to an ongoing credit crunch. KB Financial Group, the holding company of Kookmin Bank, shed 4.42 percent. Woori Finance, which runs the nation’s second-biggest bank, plunged 15 percent, the most since the shares first traded in June 2002. Top builder Daewoo Engineering and Construction declined by the daily limit of 15 percent but top carmaker Hyundai Motor gained 1.2 percent despite its weaker third-quarter earnings.

Korea’s economy probably grew at the weakest pace in four years in the third quarter, expanding 0.6 percent from the previous three months and 3.7 percent from a year earlier, according to a Bloomberg survey of economists. Yonhap, Bloomberg