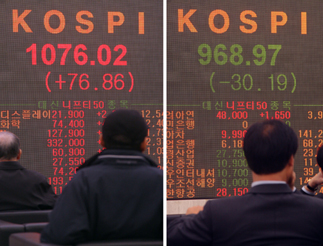 Korean stocks fell more than 3 percent yesterday on rumors that the International Monetary Fund has offered to provide the country with dollar liquidity, analysts said.

Asiana Airlines, the nation’s second-largest airline, added 7.6 percent. The price of jet fuel, the single-biggest expense for the company, dropped 3.8 percent on Tuesday due to falling crude prices, taking its four-day decline to 12 percent.