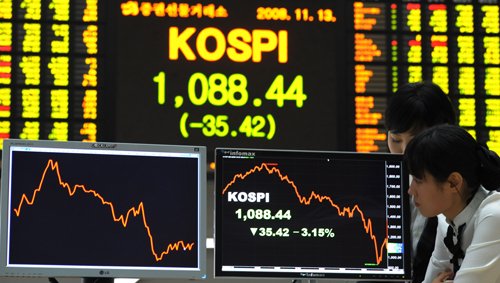 A sidecar was activated at one point yesterday as the Kospi tumbled below the 1,100 point mark. [NEWSIS]

Korean stocks ended 3.15 percent lower yesterday as investors were gripped by fears of a global recession, analysts said. The local currency plunged against the U.S. dollar.

“The key stock index plummeted as investors seemed to believe that gloomy corporate earnings fanned concerns that the global economy may enter into a recession,” said Kwak Joong-bo, an analyst at Hana Daetoo Securities.

“Worries over squeezed liquidity for domestic firms also weighed on the market.”

Steep losses caused the Korea Exchange, the bourse operator, to suspend program trading early on for five minutes after the main index futures prices fell more than 5 percent. It was the 20th such emergency break this year.

U.S. stocks nosedived Wednesday as dismal corporate earnings chilled investor sentiment. Most blue chips fell across the board, with steel and finance stocks taking a plunge.

Tech and construction issues were also rattled. Samsung Electronics slipped 1.4 percent to 474,000 won and panel giant LG Display tumbled 11.1 percent to 20,100 won after it was fined $400 million by the U.S. government for colluding with rivals on prices.