Leading the changes at SK

Leading the changes at SK 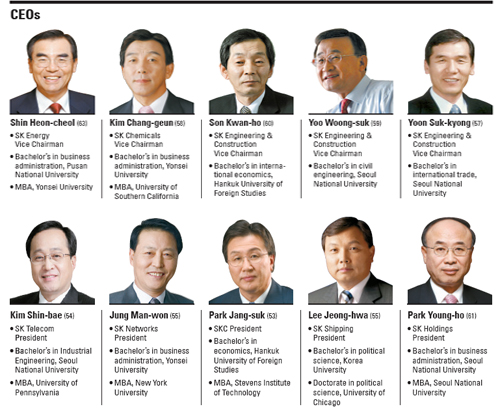 The faces inside Korea’s conglomerates is a weekly series about key figures in major conglomerates to help readers understand Korea’s business world.

“Change” is not only U.S. President-elect Barack Obama’s slogan. It has also been a guiding directive for the SK Group, now Korea’s third-biggest private conglomerate in terms of assets, for the last 10 years.

And it has paid off. The conglomerate has doubled its assets since 1998 to 72 trillion won ($51.8 billion) last year. Sales also doubled to 78 trillion won. And a more dramatic change has been made in corporate governance. The SK Group converted to a holding company structure in July 2007, emerging from a complicated structure of cross investments between affiliates, which is regarded as a chronic problem in management transparency at Korean jaebeol.

The changes have been led by Chairman Chey Tae-won, 48, the first son of former chairman Chey Jong-hyon and nephew of group founder Chey Jong-kun.

The young Chey majored in physics at Korea University.

The current chairman accelerated changes in corporate governance after he was convicted of accounting fraud in 2003 and faced an attempt by Sovereign Asset Management to oust him in 2004. He survived the two-year battle with the Dubai-based fund, and meanwhile, continued to increase the percentage of outside directors on the board of directors to improve transparency.

Shin, a veteran of SK Energy’s marketing divisions, took his current position in 2004.

He has helped the refiner earn more than 1 trillion won in annual operating profits for each of the last four years and emerge as Korea’s No. 2 exporter this year. He invested hevily in oil upgrade facilities and diversified overseas markets. 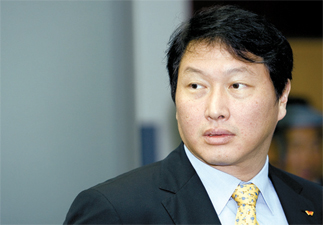 Kim laid the groundwork for SK Group’s emergence from the 1997-98 financial crisis as head of the restructuring headquarters between 2000 and 2001. As CEO of SK Chemicals, he has reinforced the firm’s precision chemicals and biotechnology operations as next-generation growth engines.

And Son Kwan-ho, now vice chairman of SK Engineering & Construction, transferred to the builder in 2000 to help it emerge from the aftermath of the financial crisis, drawing on his 20-year experience in SK Chemicals’ finance division.

Since he took office as CEO in 2004, he has focused on the builder’s overseas business.

Yoo, an engineer for more than 30 years, has contributed greatly to developing the builder’s unique technologies for underground storage bases and tunnels.

Yoon, an expert in overseas marketing, is expected to reinforce the builder’s overseas business and ubiquitous city projects in cooperation with SK C&C, an IT solution unit.

Meanwhile, Kim Shin-bae, president and CEO of SK Telecom since 2004, is well known not only in Korea but also in other countries as a leader in the mobile industry. He was named to the “Best Leaders of 2005” list by Business Week. In Korea’s highly competitive mobile market, SK Telecom has a 50.5 percent share with 22.8 million subscribers. In recent years, Kim has focused on developing mobile services’ convergence with wire services and broadcasting and on opening new foreign markets.

Jung Man-won, a former government official, helped the once-troubled SK Networks emerge from a debt workout program last year, earlier than scheduled, as CEO of the trading and marketing unit since late 2003. He led SK Networks into the parallel imports market, a first for major conglomerates, late last year. In parallel imports, a company buys foreign cars overseas at a lower price than they are available in Korea and sells them at a markdown.

Park Jang-suk, president of SKC, a film and display materials manufacturing unit, and SK Shipping president Lee Jeong-hwa, a former professor of political science at the University of Illinois in Chicago, are also among the major group CEOs. 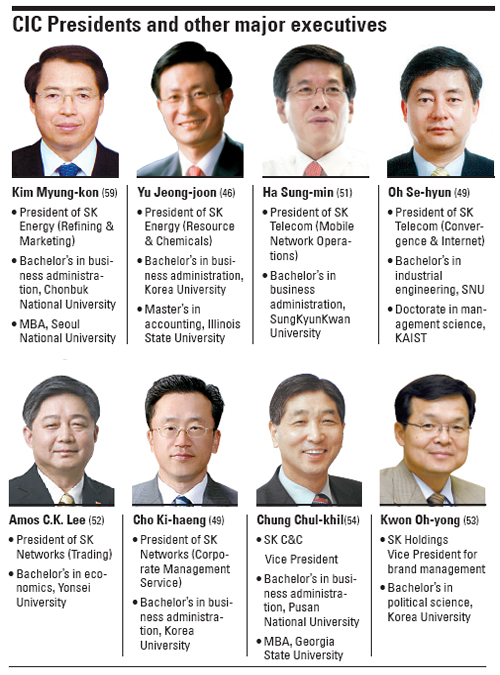 He is the main force behind SK Group’s transition to a holding company structure, sources said. Chey invited Park, who was working at Posco Research Institute, to SK in 2000.

The “CIC presidents” under these CEOs are notable as SK Group’s emerging leaders. The conglomerate last year introduced the “Company In Company” or CIC system, in which a company is divided into three or four major divisions and each division is run as if it were an independent company.

Among these, Yu is known as one of Chairman Chey’s most-trusted young executives. He played a critical role in helping the SK Group defend itself from Sovereign’s attempt to take over management rights in 2004.

He was chief financial officer of SK Corp., the former combination of SK Holdings and SK Energy, at that time.

Ha, an expert in financial affairs, led the takeover of the broadband Internet service provider Hanarotelecom, whose name was recently changed to SK Broadband. And Oh contributed to the world’s first commercialization of CDMA technology by SK Telecom in 1996.

SK Networks has four CIC presidents: Amos C.K. Lee in charge of trading, including the parallel import of cars; Song Jin-gyu in charge of information and telecommunications; Kim Tae-jin in charge of energy marketing and Cho Ki-haeng in charge of corporate management.

Cho is another young executive to watch. A graduate of Korea University like Chairman Chey and Yu of SK Energy, he also helped find a settlement to the Sovereign takeover attempt.