Shares for ships and steel soar after slump

Shares for ships and steel soar after slump 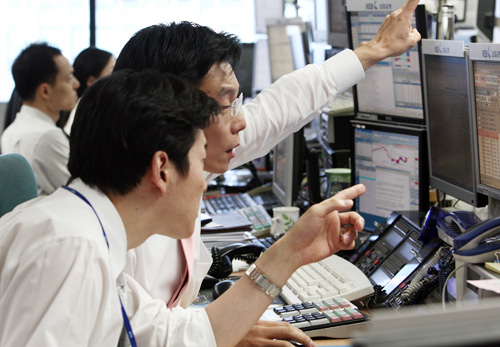 The benchmark Kospi soared 55.04 points to 1,003.73 after dipping as low as 914 in early trading. Volume was heavy at 592.1 million shares worth 5 trillion won (3.34 billion), with gainers outnumbering losers 651 to 195. The Korea Exchange, the nation’s bourse operator, suspended program trading early on for five minutes after the main index futures prices rose more than 5 percent. It marked the 22nd such emergency break this year.

“Despite the market opening lower on overnight U.S. stock losses, the Kospi’s consecutive losses for the past eight sessions seem to have created price merit, especially among shipbuilding and steel shares,” said Lim Dong-min, an analyst at Dongbu Securities.