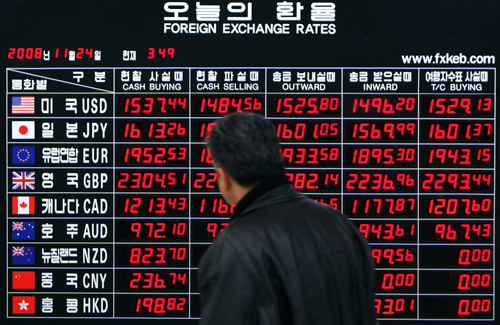 Korea’s won fell yesterday, approaching a decade low, on concern Asia’s fourth-largest economy will slip into a recession for the first time since 1998.

The won dropped 1.3 percent to 1,513 per dollar, according to Seoul Money Brokerage Services.

“Korea is more sensitive to a global slowdown than any other market,” said Dwyfor Evans, a currency strategist at State Street Global Markets in Hong Kong. “We expect continued weakness in the won.”

Seoul stocks also plunged 3.4 percent in a volatile session yesterday, dragged down by sell-offs in construction and auto shares on deepening recession woes, analysts said. The benchmark Kospi was down 33.59 points to 970.14 after drifting in and out of positive territory in early trading. The index fell below the 1,000-point level again following a 5.8 percent surge on Friday.

“Despite a strong start thanks to Wall Street rallies in the previous session, jitters set in again over a possible economic slowdown, sparking sell-offs across the board,” said Lee Sun-yup, an analyst at Goodmorning Shinhan Securities.

Industry leader Hyundai Motor dived 12.9 percent, while its affiliate Kia Motors fell by its near daily limit of 14.9 percent.