It’s Christmas in the underground

It’s Christmas in the underground 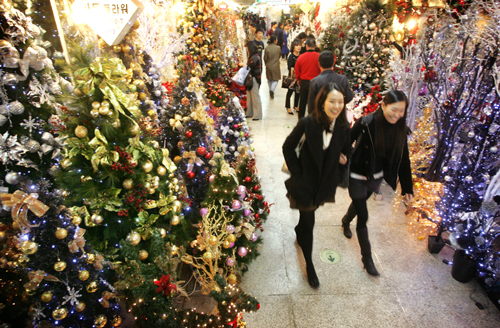 Christmas may be a month away but the passages of the underground shopping arcade in Banpo, southern Seoul, are already bright with lights and decorations.

Customers crowd the narrow corridors searching for the perfect ornaments to decorate their trees while carols like Bing Crosby’s “White Christmas” add to the holiday spirit.

In one store, Kim Sunny, a 38- year-old housewife, tried to bargain with a store owner on the price of a Christmas tree. “It’s too expensive,” Kim murmured.

“Look, it’s really cheap because we decorated [the tree] with ribbons and fancy ornaments,” the store owner replied. “It even comes apart for easy storage.”

The housewife still looks dissatisfied and decides to try other stores. Kim, who was shopping with her 4-year-old daughter, said she wanted to buy a new Christmas tree because their old one broke. “This place is really close to where I live and it has beautiful decorations that I can choose from,” Kim said. “Every year around Christmas I shop here.”

Stores at the far eastern end of the Gangnam Underground Shopping Arcade sell flowers, including artificial ones, and interior goods for most of the year. Roughly 35 stores sell fresh flowers, 40 sell artificial flowers and 80 sell interior decoration items. The stores switch to selling Christmas trees, ornaments and lights in the last two months of every year.

“Like they say, you can get any industrial product from stores along the Cheonggye stream; you can get almost any Christmas decoration here,” said Na Jong-yong, manager of the Gangnam underground stores association.

He said the underground stores’ strength is that customers can find any Christmas item in a single shopping area, the largest in Seoul. Another strength is price competitiveness.

“The Christmas goods sold here are 10 to 20 percent cheaper compared with other areas,” Na said.

He added that during this season, sales double more than usual because people nationwide visit the stores. It is also the best place to check out the latest Christmas product trends.

The stores sell both retail and wholesale, and most goods are imported from overseas.

These are without decorations. When decorations are included, such as ribbons and lights, the price doubles.

Some of the arm-length Christmas trees retail for 10,000 won. A decorated tree placed in a coffee mug sells for 30,000 won.

While many trees are artificial pines, there are also artistic trees where Christmas lights are wrapped around leafless trees with branches painted white.

Some aren’t even tree-shaped. A rectangular decoration sells for as little as 20,000 won.

“If you look closely, the details of the Christmas trees are different from store to store,” said Choi Young-bin, owner of Mit To. “Many stores outside of the Christmas season sell interior goods, so they incorporate their own designs,” Choi said. Mit To sells interior decorations most of the year, including ceramic vases.

More expensive trees are a darker green, which makes them look more realistic.

Among pine trees, Choi says those with elongated tops are popular this year.

“On your average Christmas tree it’s not easy to put up stars or angels but with the top sticking out, it’s easy for the owner to place such ornaments,” Choi said. “Additionally, this year more people are decorating the top with ribbons, and when the top branch is sticking out, it’s much easier.”

Another store owner who wished not to be identified said that people prefer less flamboyant designs this year.

“Customers prefer simple designs when it comes to decorating their trees this year whereas last year, a lot of red and gold was used,” the store owner said. “It seems people are less jolly because of the economy.”

There are other decorations on sale including mistletoe. Some sell for as little as 15,000 won, while others cost more than 100,000 won.

Other ornaments simply consist of a “Merry Christmas” sign and the traditional red and white striped candy canes. Others use a more artistic touch where actual tree branches are used to form a wreath, which is decorated with purple ornaments. There are even buckets of traditional ornaments, and more expensive ornaments that sell for 2,500 won per piece.

At the front of some of the stores, Santa Claus dolls climb up ropes or shake their bottoms to the beat of Christmas carols.

“The dolls are designed here but they are made in China,” a store owner, who wanted anonymity, said.

“It’s a world of wonder,” said Kang Hye-ri, who was shopping with a friend. “We’re planning on having a Christmas party and this place is full of stuff that we can choose from.

“Even if you don’t buy, just looking at the items is a pleasure,” she said.