What are project financing loans all about?

What are project financing loans all about? 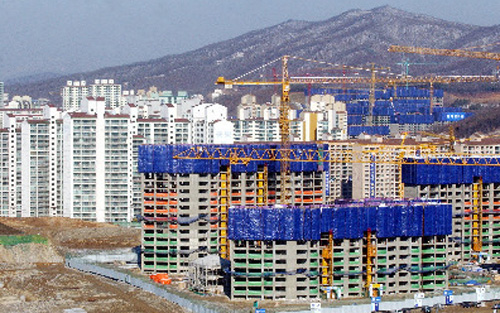 Construction companies are making the headlines these days because they face serious financial difficulties mainly driven by slow apartment sales and a frozen housing market.

However, construction companies’ difficulties are not isolated. Industry experts say their troubles could create a domino effect that might topple the economy.

So then, what exactly is project financing?

When lending money to someone, most people first consider whether or not they can get their money back from the borrower. If the chances of making this happen are slim, nobody is willing to lend money. For this reason, when people with poor credit want to borrow from banks, they must secure the loan with collateral such as land or a house.

If the borrower fails to pay back the loan, the property used as collateral becomes the bank’s property.

According to industry officials, project financing dates back to 1856. When Egypt built the Suez Canal, the country adopted PF loans for the first time in the world.

After that, developing countries started to use PF loans when they borrowed money from industrialized countries for infrastructure projects such as building bridges and highways.

These days PF loans are also provided by the nation’s banks to local companies. 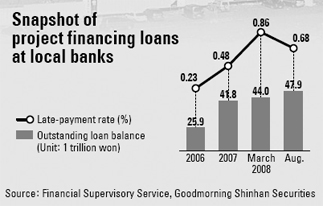 Since they do not require collateral, it is an ideal type of loan for those who have good business ideas even though they have bad credit.

In fact, project financing was widely used by construction companies after the 1997 Asia financial crisis. After the crisis, there were many people who wanted to purchase apartments but supply was failing to meet demand, and apartment prices suddenly soared. Once an apartment was built, a multitude of people would queue up to buy.

In this environment, apartment projects were regarded as a golden goose for construction companies.

In order to capitalize on this boom, many construction companies jumped into the apartment business. But they were in need of bank loans to carry out their projects.

Large construction projects are usually built by a consortium of a property developer and a builder.

Property developers are usually owners of land or a smaller company that has an idea for a construction project but does not have the resources to secure large loans from banks.

For banks, it is a huge loss not to provide loans to property developers because the loans pay high interest rates. But banks are not allowed to provide loans for people or companies that do not meet certain financial criteria.

That’s where project financing steps in.

Property developers create a paper company and invest their money in land where a building or apartment complex will be built. Then, banks provide loans to the paper company. If the company fails to pay back the loan, builders guarantee that they will complete the construction project anyway. Builders also promise that they and not the developers will pay back the loans in a worst-case scenario.

For banks, project financing loans are doubly tempting because they get their money back with high interest when apartments are sold, and they later provide loans to people who want to buy the recently built apartments.

Over the past couple of years, the nation’s housing market has prospered, and there were no reasons for banks to deny project financing loans.

During the building boom, banks didn’t even look into the business proposals of developers and builders too carefully. Securities and savings banks, which jumped into PF loans later than banks, even offered project financing to unstable property developers, believing the apartments would be quickly snapped up once they were built.

This June, it was more than 60 trillion won.

Among these, getting excessive loans from banks was prohibited, and people were not allowed to resell their houses until a certain period of time had passed.

Now as the U.S.-led financial turmoil spills into the real economy, not many people have been able to purchase houses. And this has caused apartment prices to fall.

If apartments are not sold, project developers will default on their loans. So the debt burden goes to the builders who guaranteed to pay back loans instead of the developers.

The result of this phenomenon has seen small and mid-sized builders going out of business. Even banks and financial institutions are under financial risk because they aren’t receiving money from property developers and builders.

When banks and financial institutions face a liquidity shortage, they are reluctant to lend money to individuals, which causes large-scale economic problems.

As project financing surfaces as a problem, there have been rumors that some construction companies are going bankrupt.

Most of the rumors turned out to be false, but Shinsung Engineering and Construction and C & Woobang Construction collapsed.

However for companies labeled as C, banks provide additional loans only when the builders sell some of their properties to secure liquidity.

Companies labeled as D, however, will not be rescued because they are seen as being inviable.

But construction companies are reluctant to ask the association for help. Only 30 construction companies have registered so far, and all of them are small or mid-sized. Builders say if they register, it becomes public that they are having financial difficulties, which will hurt their share prices and reputation.

The association of creditors later adopted looser standards for helping construction firms because so few builders applied for the original rescue plan.